Review your privacy settings, or no update for you

Microsoft's rollout of Windows 10 Creators Update has begun, complete with a privacy dialogue box shown by default to all users.

When will you get the update? Microsoft says “the first phase will target newer devices … we will then expand the Creators Update release to additional devices based on the feedback.”

The process will take “several months”, but if you are impatient, you can upgrade immediately using the Update Assistant.

Windows 10 Mobile is also being updated, with rollout for phones beginning on April 25.

The notification that an update is ready comes in the form of a dialogue asking you to review your privacy settings. If you defer reviewing your settings, you also defer the update. The privacy settings review screen is simplified, with an on/off switch for five categories: Location, Speech recognition, Diagnostics, “Tailored experiences with diagnostic data”, and Relevant ads. 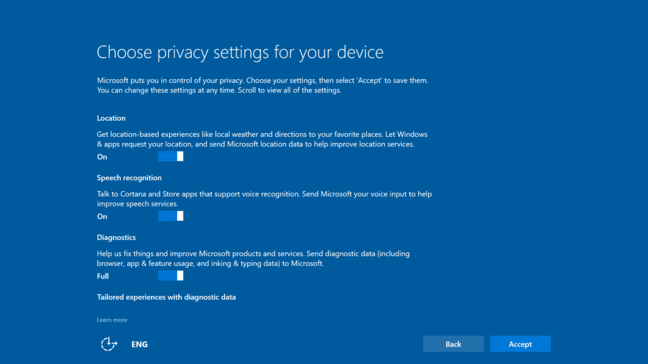 Enjoy this screen while you can see it though, because you cannot easily get back to it. Changing privacy settings after you click Accept is a matter of going back to the privacy section in Settings, with 18 categories at last count. Another oddity is that the simplified settings screen does not reappear (in my testing) if another user signs in, even though they are per-user settings.

A further complication is that the Cortana app has its own settings. When installing this update, you may see a dialogue prompting you to “Use Cortana,” or “Not now”.

This states that “Microsoft collects and uses information including your location and location history, contacts, voice input, speech and handwriting patterns, typing history, searching history, calendar details, content and communication history for messages and apps, and other information on your device. In Microsoft Edge, Cortana uses your browsing history.” If you choose to accept, but later change your mind, the setting is rather buried. You have to open Cortana, click the Notebook icon, then About Me, then Sign out. 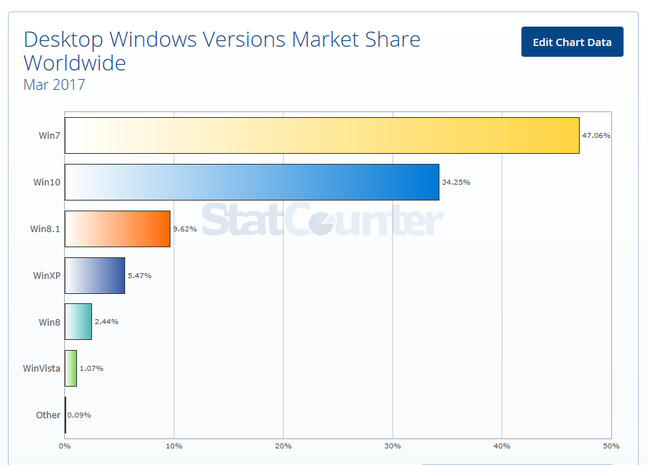 Should you upgrade? “Creators Update” is a misnomer; the real value of this release is in numerous small improvements to Windows. Many of these are listed in our review; but there is more. Business users will like the MBR2GPT utility, for example, which helps you convert a drive to GPT partitioning without destroying data, enabling migration to UEFI (Unified Extensible Firmware Interface) in place of BIOS, and security features including Device Guard and Secure Boot. Note that this tool alone is not sufficient; you will also need to change system firmware settings.

Developers should note new capabilities in the Windows 10 application platform, listed here. Notable features include app streaming, which lets users launch an application before it is fully installed; a new system-wide Tasks API; “Project Rome” which now lets you have an application on Android which hands over seamlessly to a Windows application when you start working on a PC; and new extensions for the Desktop Bridge, which lets wrap Windows desktop applications so they can be installed and managed like UWP (Universal Windows Platform) applications. Among other things, these extensions make it easier to transition users from an existing installation of your application to a Desktop Bridge version.

Windows 10 is getting better, but while its share of Windows installations grows, Microsoft will be aware of another key statistic, that Android has crept ahead as the most used platform for accessing the internet. Windows still dominates the desktop, but the ascendancy of mobile continues. ®