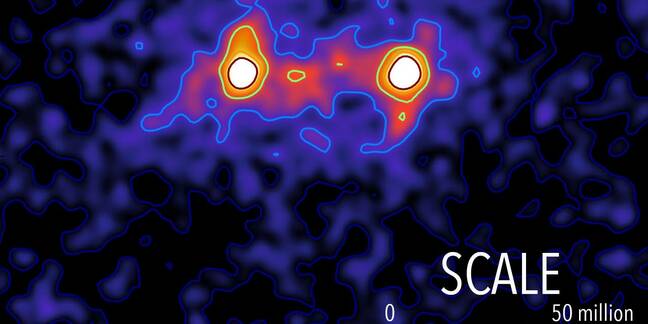 Example ... False color snap showing one of the dark matter bridges between, in this case, two galaxies (Image credit: University of Waterloo)

Pic Astrophysicists have for the first time spotted filaments of dark matter forming bridges between galaxies tens of millions of light-years apart.

Dark matter – the ghostly substance that is thought to make up about a quarter of our universe – is strangely hard to find. Some physicists believe dark matter is made up of weakly interacting massive particles (WIMPs) and some believe it’s all about axions.

But it can be detected through its gravitational effects. Now Michael Hudson, professor of astronomy, and Seth Epps, a former master’s student, at the University of Waterloo, Canada, used weak gravitational lensing to home in on the presence of dark matter.

Einstein’s theory of general relativity dictates that the gravitational effects of mass bend spacetime, bending passing light rays, too. It causes images of distant galaxies to distort and bend around the invisible mass of dark matter. Epps and Hudson analysed photos of 23,000 galaxy pairs floating 4.5 billion light-years away, taken with the Canada-France-Hawaii Telescope.

They combined the images to map the web of dark matter between the galaxies. The method outlined in a paper published by Monthly Notices of the Royal Astronomical Society explains why multiple images of galaxy pairs are needed.

The signal from an individual thread of dark matter is very weak, as the filament density is much lower than the surrounding density of matter in a galaxy or cluster of galaxies. The images of the galaxies have to be stacked together to work out the “ensemble average” distribution of the elusive substance.

“For decades, researchers have been predicting the existence of dark-matter filaments between galaxies that act like a web-like superstructure connecting galaxies together," said Hudson. "This image moves us beyond predictions to something we can see and measure."

The next step is to build a larger, more detailed dataset so that the researchers can begin to unravel some other properties such as the mass of the dark matter.

"By using this technique, we’re not only able to see that these dark matter filaments in the universe exist, we’re able to see the extent to which these filaments connect galaxies together," said Epps. ®