Back to the future: Honda's new electric car can go an incredible 80 miles!

Honda's new electric car, the Clarity, is garnering a lot of attention – for all the wrong reasons.

Available later this year, the car is expected to cost the same as the new Chevy Bolt and upcoming Tesla Model 3, but will have just a third of their ranges, managing only 80 miles on a full charge.

While that would have been normal when electric cars started hitting the market back in 2011, recent advances and newer models have focused on getting more out of a single charge. Cars have now started pushing past 200 miles, with some Chevy Bolt owners claiming 300+ miles on a single charge.

Although electric car manufacturers have long claimed that 95 per cent of car trips are under 50 miles, they have also grudgingly acknowledged that consumers' fear of running out of charge is one of the main barriers to purchasing an electric car. And so they have been working tirelessly on removing that concern.

Not so Honda, who swear blind that the limited 80-mile range is in fact intentional. Its logic? By keeping down the battery costs, it can provide a more luxurious car for the same mid-range price.

And it claims there is a big market for people who are ready to acknowledge they don't need the full range (most of them being current electric car owners), but would like to get more room and better interiors for their money.

Honda is even bullish about its new market. "There are a lot of claims in this space but no automaker knows more about customers of electrified vehicles than Honda," claimed VP Steve Center at its launch at the New York International Auto Show on Wednesday. 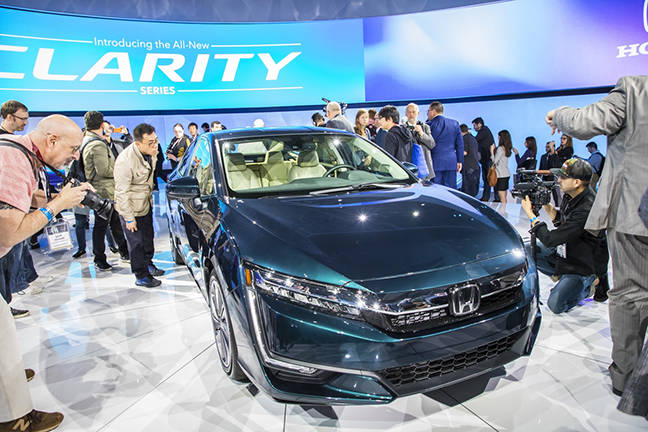 The new Clarity: stationary but not because it's run out of charge – yet

The future is... hydrogen?

Making electric car fans even more suspicious is the fact that the Clarity will come in three variations: electric, fuel cell and hybrid.

Honda, it seems, thinks that hydrogen fuel cells are a better long-term bet, despite their failure to take off and the roaring success of battery-powered electric cars in comparison.

Honda's Center said at the launch: "The Clarity Fuel Cell is for the true believers, the most devoted of green motorists, who really want to cut the cord altogether and be on the absolute leading edge of an advanced technology future.

"For the long term, we continue to believe that fuel cell technology has the greatest potential to address society's energy and environmental concerns while better serving the needs of customers in terms of driving performance, range and refueling, which for the Clarity is 366 miles range with a 3‑ to 5‑minute refuel."

He went on to label electric car owners "purists" and noted that Honda viewed hybrid and electric vehicles as only "near-term" vehicles, with the real market being in fuel cells.

"Our outlook for fuel cells is bolstered by the tremendous initial reaction we have received from our customers about their experience with the Clarity Fuel Cell and from media who've already had the opportunity to drive it," he argued.

But for those purists, he noted, if you want a large, luxurious, 5‑passenger battery-electric sedan that's affordable, the Clarity EV is your car." We'll see. ®