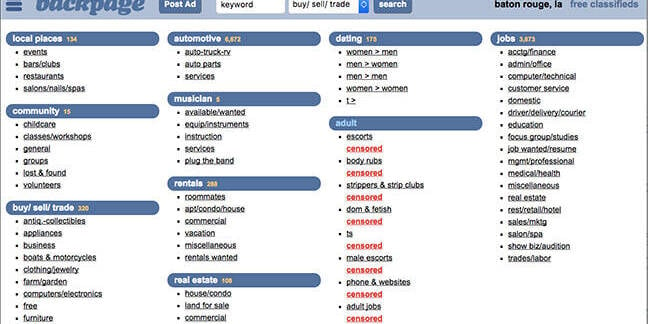 Three people have been indicted for operating a sex trafficking ring through the scandalous classifieds website Backpage.com's adult section.

Feng Yang Chen, 41, LiangLiang Guo, 31, and Cheng Qi Li, 28, all of Flushing in New York State, are accused of conspiracy in regards to "an interstate prostitution business". Chen faces additional charges regarding the use of force, fraud and coercion, and faces a mandatory minimum penalty of 15 years in prison and a maximum of life. Guo and Li face a maximum of five years behind bars.

The indictments are the latest in a string of legal matters regarding the website's use for sex trafficking, including of children. Back in 2015, a judge dismissed a lawsuit brought against the site by former victims of child sex trafficking.

After receiving two amicus briefs (submissions intended to educate the court on points of law that are in doubt, or raise awareness about aspect of the case that might otherwise be missed) defending Backpage from the Electronic Frontier Foundation and the Center for Democracy and Technology, the judge concluded:

Congress has made the determination that the balance between suppression of trafficking and freedom of expression should be struck in favor of the latter in so far as the internet is concerned.

Backpage is the largest adult classified ads site in the USA, second only to Craigslist in popularity for all online classifieds. Craiglist withdrew from adult classifieds in 2010, leaving the field to Backpage, which now derives 99 per cent of its income from "adult" advertisements.

The site's culpability for these activities has long been in dispute. Its two controlling shareholders were arrested and charged with conspiracy to commit pimping last year, as was CEO Carl Ferrer, again on allegations of sex trafficking.

In response to considerable Congressional examination, the site decided to close down its adult section this January while complaining it was doing so as "the direct result of unconstitutional government censorship".

The indictment against Chen, Guo and Li states that throughout the conspiracy, they victimised 12 individuals who were transported from state to state to engage in prostitution in a number of hotels. It seeks the forfeiture of $476,354.74 in proceeds from the illegal prostitution activities, as well as two properties located in Flushing, a 2012 Porsche Cayenne, as well as multiple cellular telephones, computers, and iPads utilised during the prostitution conspiracy.

Acting US Attorney James Kennedy stated: "While the sexual exploitation of another is a criminal act that victimizes the person exploited, a criminal enterprise such as this, which provides profits to those who orchestrate such exploitation, is particularly pernicious."

"The defendant allegedly callously abused and exploited vulnerable women for her own financial gain," said ICE-HSI Special Agent-in-Charge James C Spero. "The charges announced today will hopefully lay the foundation to restore the dignity of those victimized by this alleged criminal enterprise." ®

Silence! Cybercrime's Pinky and the Brain have nicked $800k off banks

One does dev, the other ops, and they're believed to be former white hats

Bod accused of masterminding malware attacks on banks around the world

Reports link arrest to receipt of money from foreign companies