'Nobody's got to use the internet,' argues idiot congressman in row over ISP privacy rules 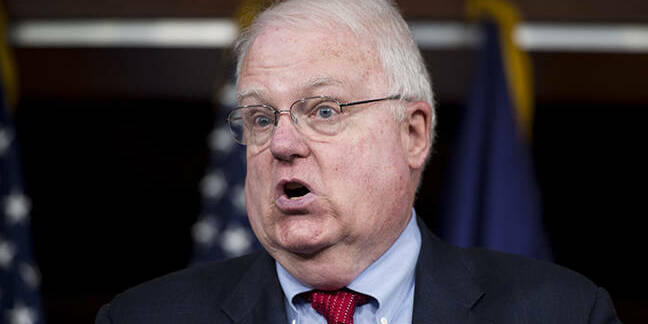 Faced with an angry citizen asking why he had voted away their online privacy rights, US House Rep Jim Sensenbrenner (R-WI) had a remarkable answer: you don't have to use the internet if you don't like it.

Speaking at a town hall meeting in Wisconsin on Friday, the Republican legislator was asked about his vote to kill off proposed information safeguards – a move that effectively gave American ISPs the green light, as well as the right, to sell subscribers' sensitive personal details without requiring their consent or even having to inform them.

The voter disputed the Republican line that ISPs should not have to deal with stricter rules than companies like Google or Facebook, arguing that: "Facebook is not comparable to an ISP. I do not have to go on Facebook. I don't have to go on Google. My ISP provider is different than those providers."

Sensenbrenner's response? "Nobody's got to use the internet."

Which is strictly true. But only in the same way that nobody has to use the roads. And nobody has to make phone calls. It's not really a good argument to explain why your representative actively voted away your right to opt out of your personal information being sold, however.

He went on to praise broadband providers because they had "invested an awful lot of money" in building up networks. He argued that "I don't think it's my job to tell you that you cannot get advertising for your information being sold. My job, I think, is to tell you that you have the opportunity to do it, and then you take it upon yourself to make the choice."

He finished up by noting that he viewed getting rid of the privacy rules – drawn up by America's comms watchdog the FCC – as allowing "more choices rather than fewer choices" and that his vote would help prevent "the government controlling our everyday life."

That would appear to reflect the argument put forward by the Republican party that less government equals more competition – but unfortunately it is an argument not borne out by the facts.

The FCC acknowledges that around 75 per cent of US consumers do not have more than one choice of high-speed internet provider: a situation that has been carefully developed by the cable industry oligopoly to maximize profits. This is something that was pointed out in a timely opinion piece by law professor Susan Crawford in the New York Times on Monday.

It's also worth noting for the 100th time that the United States has lower real competition in internet access, at slower speeds, and at higher prices than almost any other advanced Western nation.

Sensenbrenner's response gained attention when it was recorded and then posted online by Super PAC American Bridge 21st Century – a Democratic advocacy group with its own habit of distorting reality.

When Congress voted to kill off the FCC rules, American Bridge's president Jessica Mackler offered to buy the browsing history of Senator Jeff Flake, who was the main driver behind the decision.

Of course, that's not how the sale of users' personal information works: companies very rarely provide individual user files. Instead they aggregate information and typically sell advertisers access to specific demographics for the simple reason that it is more profitable and they retain control over the information.

American Bridge knows that, so the offer to buy Flake's browser history was willfully misleading.

But in case you suspect that the Congressman's comments have been misreported by a partisan advocacy group, his Twitter account soon made it clear they weren't.

When American Bridge posted the video with the comment "[Jim Sensenbrenner] tells his constituents not to use the internet if they don't like his vote to sell out their privacy to advertisers," Sensenbrenner's official account responded: "Actually, he said that nobody has to use the internet. They have a choice. Big difference."

So there you have it: if you don't like the service that internet providers give you – or their selling of your private data – then you can choose to just not get online.

While that may seem like an entirely realistic prospect for a 73-year-old Congressman who has paid-for support staff, the rest of the country is unlikely to agree. ®