Renewal period volatility is giving Barracuda a headache as the cloud-focussed protection and security outfit follows its customers away from box sales towards annual subscriptions. Growth has been, well, moderate.

It made $89.3m in revenues in its final fiscal 2017 quarter, 6.7 per cent up on the year before but just an 0.6 per cent increase on the previous quarter. Profits were $3.2m, identical to the year-ago number and 77.8 per cent higher compared to the third 2017 quarter.

So we see good but maybe uninspiring results in a still growing business. President and CEO BJ Jenkins mentioned "a solid fourth quarter" in his prepared remarks. "Our performance led to record earnings and the highest free cash flow in our company's history at $58.9 million," he said. 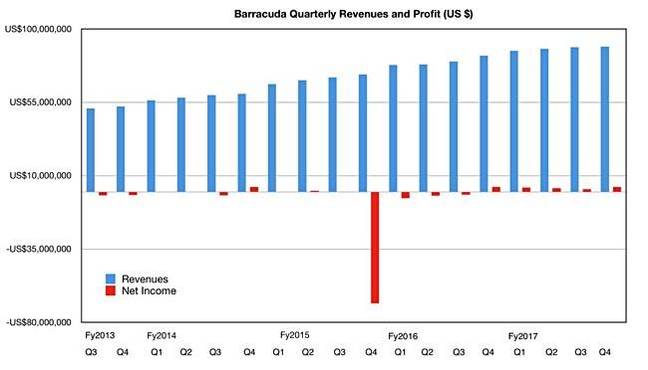 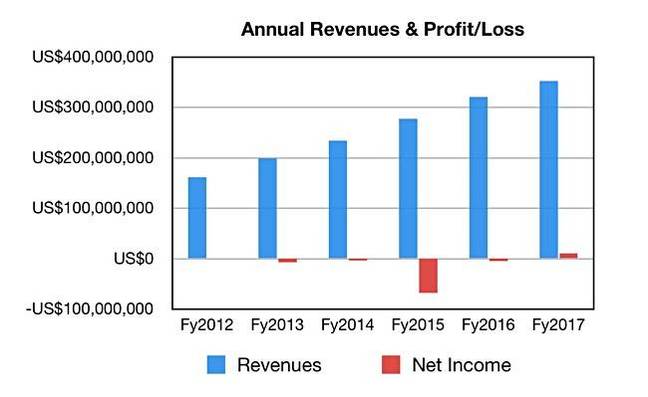 What we see is a company that has reacted to its customers moving away from on-premises appliances towards public cloud and subscriptions, and is enjoying less than stellar profitability as a result. It grew its subscriber base by 12,000 quarter-on-quarter and almost 43,000 year-on-year but profits stayed exactly the same; $3.2m, reflecting the loss of appliance sales.

Ader writes: "Barracuda once again beat Street consensus expectations for billings, revenue, and EPS, driven by solid execution... We were pleased to see the company show progress in its transition to becoming a public/private cloud security and infrastructure provider, as evidenced by 21 per cent billings growth in the company's core business and reaching the 1,000 customer milestone for public/private cloud."

Jenkins talked of a cloud and security focus in the earnings call. "Barracuda's vision is to be the leading security platform for the mid-market. To achieve this, we are aligning our investments, product portfolio and routes to market to address our customers growing adoption of cloud, SAAS and managed service, IT deployment models with pay-as-you go and ratable billing options."

Responding to a question he said some three and five-year subscription deals were being replaced with annual ones, or even shorter term ones. There is more variability in deals with some, for the Intronis MSP offering, paying by the month.

CFO Dustin Driggs showed Barracuda was a US-centric business. "On a geographic basis, we derived 76 per cent of total fourth quarter revenue from the Americas, 18 per cent from EMEA and 6 per cent from Asia Pacific," he said. That looks like an opportunity.

Ader writes: "The company is making clear progress in its business transition from on-premises appliances to cloud-based solutions [but] while the company has made progress in reaccelerating growth in the core businesses, the public cloud portion of the business is still nascent, and Barracuda's leadership position in the enterprise market is not yet fully proven." ®