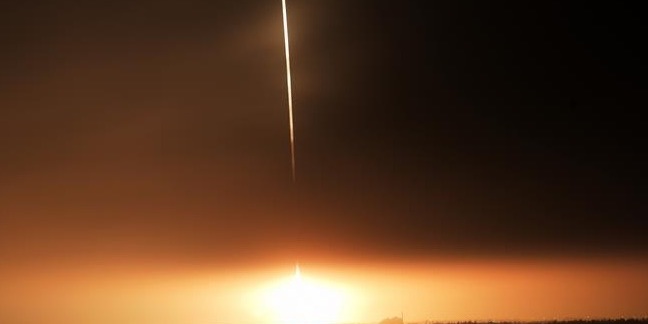 China's ambition to launch a permanently-crewed space station is a little closer today after the nation successfully launched its first robot space truck.

The Tianzhou-1 lifted off as planned on Thursday evening, carrying with it six tonnes of supplies for the Tiangong-2's crew of two.

The six tonnes (6,000kg) of cargo it hauled on this mission is significant, as that's the same payload SpaceX's Dragon can haul and a little more than Orbital's ATK or current Russian re-supply vessels.

China's thrilled by the success of the launch, because it knows that a permanent space station will need regular re-supply. But the mission's not a complete success yet, because the Tianzhou-1 has to dock with the lab. Indeed, China plans to dock it three times: once to get there, a second time to test Tianzhou-1's ability to dock from a different direction and a third time to test fast-dock tech that will reduce coupling time to just six hours.

Also important for the mission's success is transfer of fuel from Tianzhou-1 to Tiangong-2. In-space fuel transfer has only been done by Russia and the USA. China wants to join that club as a step towards operating its own space station and because it loves to match other nations' achievements.

China as a nation also wants to get its space station aloft so that whenever the International Space Station is decommissioned – theoretically in 2024 – it can claim a lead in space and/or generously invite other nations to join it in continuing humanity's exploration of the universe.