LinkedIn irked privacy advocates by dropping a Bluetooth-enabled "Tinder for marketers" feature into its mobile app on Thursday.

Respected security researcher Rik Ferguson was nonplussed at changes in LinkedIn's mobile app that threw up a pop-up requesting permission to share data with nearby Bluetooth devices even when users weren't using the business networking app. The pop-up sprung after an update that billed itself as only offering "general bug fixes and performance improvements". 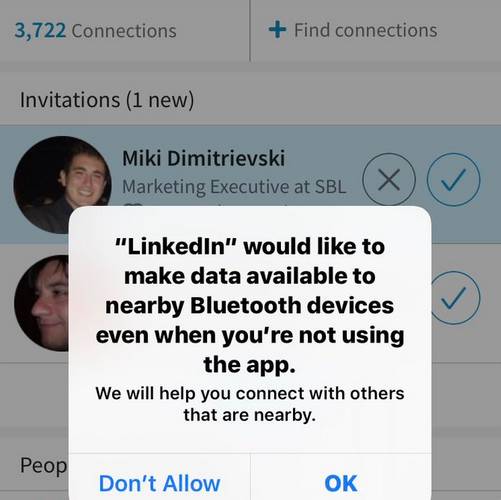 You want WHAT, LinkedIn? [source: Rik Ferguson with his permission]

Ferguson shared a screenshot of the discombobulating prompt on Twitter. The reaction was negative and snarky with more than a few suggesting the way to go was to delete the app.

In a statement to El Reg, LinkedIn said it was trialling the technology as a way of making it easier for users to connect with each other at conferences and similar events. It admitted the delivery of the prompt to enable this feature was a bit off and promised a prompt revision.

In order to help our members more easily connect with one another, we're exploring an opt-in "find nearby" feature that will help them find other members nearby. This will be an opt-in experience and members will have control of when their location is used for this feature. A prompt to enable Bluetooth on our iOS mobile app went out in error to a small group of LinkedIn members. We are working on a fix immediately and we apologise for any confusion.

In response, Ferguson questioned whether the incident was isolated to a small group of users. "Plenty of people on Twitter were able to replicate and I replicated it on three phones all running 9.1.25 of the app," he said, adding "as if by magic, it looks like 9.1.26 came out this morning."

In related news, Microsoft-owned LinkedIn this week notified users about upcoming revisions in its terms of service, due to come into effect in early June.

The social network for suits plans to make it easier for users meet up with other members. "You'll have the ability to see members nearby who have also opted-in, so it's easier to meet up when you're at a conference or out for lunch," it said. ®