(You can't) buy one now! The flying car makes its perennial return

There's a steering wheel in my pants. It's driving me nuts

Something for the Weekend, Sir? Stop squeezing my knob. No seriously, I've had enough.

"Then you give it a squeeze."

OK but not until I'm ready.

"You won't get any benefit until you squeeze it," he announces to the dark, crowded room before turning back to me. "Do it now. Go on, give it a quarter-turn to the right."

Reluctantly, while everyone else watches, I squeeze my knob. Ouch.

I tell you, these spin classes down at my local gym are murder.

But it's worse when the instructor has been drinking the night before because it means he'll be less inclined to participate in the frantic cycling himself. Instead, he walks around the hot and sweaty room, shouting at us to go harder, faster, etc, while tweaking the resistance knobs on our bikes.

I do wish he'd leave my knob alone.

Legend has it that the concept of spin classes, in which a group of masochists ride custom-built stationary bike machines to loud, thumping music, was conceived by a South African called Johnny Goldberg at the end of the 1980s.

Hey, anyone can have a bright idea: the difficult bit is in implementing it. In Johnny G's case, he trademarked a "spinning" logo, took his classes to Hollywood and turned them into a worldwide fitness fad that has proved strangely enduring. Ker-ching!

A short while ago, at the end of another 45 minutes of relentless, sweaty knob-tweaking, one of my fellow gym members asked how many calories she could expect to burn at each class. Aha, I like a challenge, and so I decided to use my access to various wearable tech devices in order to find an answer to this question.

Well, I suppose it was a bright idea: the difficult bit was in implementing it.

Bound up by a host of bands and straps, I looked like a cross between a Running Man baddie and a punk reject hanging around Vivienne Westwood's shop on the King's Road in 1976. Yet I am tech gladiator incarnate, I told myself. I am Ali-Stor of Bromlar, son of Al-An, defiler of words, wearer of strap-ons, tweaker of knobs!

Maybe the developers of these fitness trackers thought it would be a good idea too. As it turns out, their implementation leaves a little to be desired. Every device measured and calculated my physical effort in a different way, producing wildly different results.

One heart-and-respiration monitor strapped across my chest reckoned I had burnt around 800 calories during the spin class. Another tracker reported a more modest 500 for the same session, with others suggesting various figures in between.

Best of all was my trusty Fitbit, which told me I'd been sitting down and doing nothing for those 45 minutes. No problem, I can simply use the app to log this period in my exercise record as a spin class and let its online database calculate a typical burn for the period.

Oh thanks a bunch, Fitbit. That's the same as for a 20-minute stroll between my house and the local train station. Next time I consider attending a spin class, maybe I'll go full-on and nip out to the newsagent instead. It'll use up more calories and my tender knob can be left unsqueezed.

Here's another example of how thinking up great ideas is a darn sight easier than making them a reality: self-driving cars.

Just as you were beginning to yawn at reports of lane-straying vehicles and crash-prone prototypes, even Apple has decided the idea is worth a punt and it has become a burning topic once again.

Hold on to your horsepowers, though, because we're also about to witness yet another comeback of that perennially improbable concept of the flying car.

Everyone old enough to vote will have heard or read about at least three attempts at producing a flying car within their lifetimes. For most of us, we've stumbled across many, many more. I can think of a couple of dozen without trying. Come to think of it, a cousin on the continental side of the Dabbsy clan was once rumoured to be embroiled in a hopelessly incompetent flying car project, but that may just have been a caddish attempt to squeeze an early legacy downpayment out of an ageing grandparent.

As a dedicated Register reader, I dare say you too will have personally met, or be related to, or even be one of the people who had a terrific flying car concept that never – and I am fully aware that this pun has been used in EVERY flying car article EVER – got off the ground.

So let me introduce you to the Liberty range from Netherlands-based PAL-V. 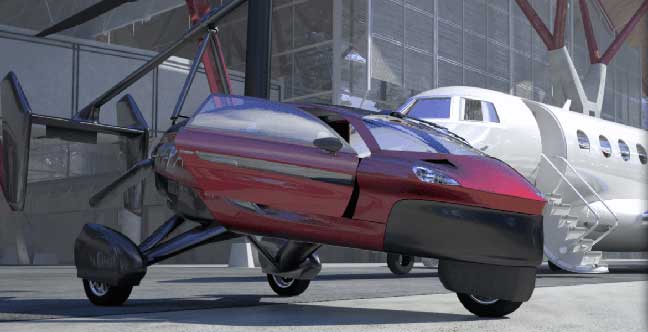 As you can see on the PAL-V website, with its photos of women in evening dress and what appears to be James Bond's dad, the Liberty gyroplane is being marketed as a bit of a playboy's gadget for the well-heeled. If you have €0.5m to burn, it's yours.

It's even enjoyed a bit of mainstream press coverage, which can only mean that it was a quiet news day, with The Independent dreamily and somewhat amusingly explaining that the rotors are "powered by the wind".

Best of all, it turns out PAL-V has been actively selling them since February. "The first commercial flying car in the world is now a fact," proclaims the press release.

Wow, so flying cars are really happening at last?

Er, hang on. You can't buy one as such but you can put down a "non-refundable option to purchase" (i.e. a deposit). Great, when do I pick up the keys?

"Later in 2017 we will start building a preproduction series..."

Oh dear, how long should I wait, then?

"Deliveries of road and air certificated models are scheduled by the end of 2018."

And of course you'll need a pilot's licence. Duh. I've gone off the whole idea. Half a million euros would buy me a lot of first-class travel without all that dicking around with flying hours, lack of luggage space and having to dress up like a Roger Moore held hostage in Primark.

Besides, heh, you never know: it's just remotely possible that the flying car may never happen. Again.

Alistair Dabbs is a freelance technology tart, juggling tech journalism, training and digital publishing. He genuinely wishes PAL-V luck with its plans but reserves the right to keep waiting for someone to develop a real flying car – which is to say one that hovers by anti-grav and folds into a suitcase like for George Jetson with a single squeeze of his knob.