Mitigating the side effects just requires removing the headset 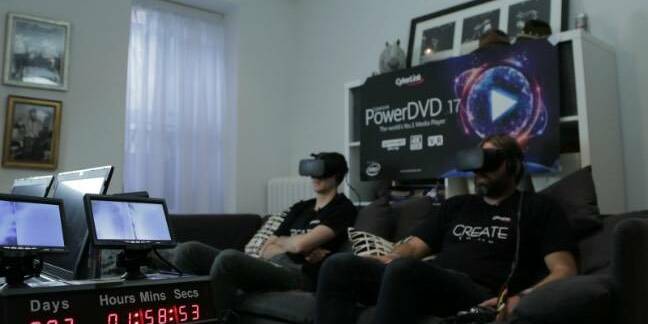 A New Yorker and a transplant from London to the Big Apple last week managed to endure watching virtual reality videos for 50 hours non-stop, setting a Guinness World Record in the process.

For their trouble, they raised their heart rates, hallucinated, and experienced involuntary open-eyed "micro-naps."

It's not clear how many minutes of Clockwork Orange-style screen-staring were necessary for the pair to be immortalized as world record holders. No one has ever bothered to set a record for the "longest marathon watching virtual reality."

In such cases, related categories serve as guidance. A Guinness World Records spokesperson via email told The Register, "The minimum for this particular record category is based off of research conducted by our Records Management Team which includes existing and relevant virtual reality categories and any related events."

In this instance, a Berlin-based gamer's 48-hour stint playing VR games in January, 2016 appears to have provided the unofficial time to beat.

VR and augmented reality (AR) systems have been the subject of major interest from tech giants like Apple, Facebook, Google, and Microsoft for several years. But sales have been disappointing. After predicting 2 million unit sales in 2016, research consultancy CSS Insight revised its prediction down to 1.2 million.

During the viewing marathon, Fragoso and Christison were allowed one five-minute break per hour, which accrue if unused, per Guinness rules. "Alex and I both ate with the headsets on to save up on break time," Fragoso explained in an email to The Register. "That limited our diet to mostly finger foods, sandwiches, and smoothies for the two days we were plugged in."

Fragoso last year set a similar record for "longest marathon watching television," also under the auspices of CyberLink, after viewing a 94-hour non-stop stream of TV.

The shorter time achieved for VR viewing, as Christison noted in Guinness World Records' post on the subject, suggests that virtual reality takes a greater mental and physical toll than actual reality, at least when not engaged in high-stress physical activity.

Fragoso confirmed that his goggled marathon was unpleasant. "I'd describe the whole experience as grueling," he said. "I thought the disconnection from the world that I experienced with last year's binge watching record was bad, but it's even worse with a headset strapped on. You can sometimes hear other people in the room over the headphones but you can't see them and you don't get any sense of the time of day. Alex and I both were having visual hallucinations by the end."

The pair exhibited elevated heart rates after 50 hours without sleep and neurological side effects that included zoning out ("micro-naps") and "acute hallucinations," according to Dr Robert Glatter, a specialist in emergency medicine and assistant professor at Hofstra Northwell School of Medicine, who evaluated the VR viewers.

"Both participants described visual hallucinations in the later stages of the attempt, which are at least related to sleep deprivation itself," Glatter explained in an email to The Register. "The degree of hallucinations were minimal and resolved after the attempt without any adverse after-effects. Micro-naps are the brain's way of dealing with sleep deprivation and signal a transition between activity in special areas of the hypothalamus and brainstem that are integral to wakefulness and sleep."

Glatter said both participants experienced minimal nausea and eye strain, noting that their occupational use of VR may have helped mitigate the side effects typically seen.

"I recommend taking frequent breaks when using VR, especially for those with minimal experience," he advised. "In general, it would be wise to take a break after 30 minutes of use."

Nonetheless, Fragoso pointed out that he enjoyed the VR movie experience, in short doses: "The 360 films are great but you have to keep them short because they demand so much interaction from the viewer. I imagine it would be easy to completely miss major points of a feature-length 360 movie just because you weren't looking in the right direction. That or you'd be doing a lot of rewinding."

Despite the physical toll, Fragoso expressed enthusiasm for VR, which is perhaps more understandable given his involvement in software development. "In my opinion, VR games and movies are absolutely poised to become a mainstream means of entertainment," he said.

"The cost of PC hardware and the VR units themselves is prohibitive but it will only get better with time, just like any new computing technology. The company I work for, Fuzz, and a number of other agencies I've visited have a suite of VR devices for employees to tinker with. The interest is there from both the developers and consumers."

Glatter, as a physician, argues for more caution with VR technology. "I believe that more research is necessary as we transition to VR as the next metaverse in rapidly expanding mobile technology," he noted. "We need to study not only medical issues such as nausea, eye strain, and vestibular effects, but consider the psychological effects of prolonged immersion in such technology."

"We know that VR is quite helpful for treating those who suffer from PTSD, anxiety, and depression," Glatter said. "We don't, however, want to risk adverse psychological effects associated with prolonged use of the technology. We need to practice moderation, especially in children and teens with developing brains." ®