Photo NASA's Cassini probe has made its first dive inside Saturn's rings, skimming about 1,900 miles (3,000KM) over the surface of the gas giant's stormy atmosphere.

America's space boffins briefly lost contact with their craft during its descent on Wednesday. That's because the dish antenna used to phone home to Earth acted as a shield to deflect any loose rocky debris. Having made its flyby unscathed, the probe reoriented the high-gain antenna, and beamed back to base the first close-up images of Saturn's weather systems.

"No spacecraft has ever been this close to Saturn before. We could only rely on predictions, based on our experience with Saturn's other rings, of what we thought this gap between the rings and Saturn would be like," said Cassini project manager Earl Maize of NASA's Jet Propulsion Laboratory.

"I am delighted to report that Cassini shot through the gap just as we planned and has come out the other side in excellent shape."

The probe passed within about 200 miles (300KM) of the innermost ring of Saturn during its trip, at a speed of 77,000MPH (124,000KPH). At that velocity, any impact with space litter would be catastrophic, but it appears the zone between the rings and the planet was free of any cosmic dreck of consequence.

On its trip, Cassini photographed the turbulent upper atmosphere, capturing images of a vast circular storm and the clouds that form on the outer layer of the planet. The images were then sent over a billion miles (1.6bn km) to our home world, via the Deep Space Network, processed by scientists, and shared with the world on Thursday. 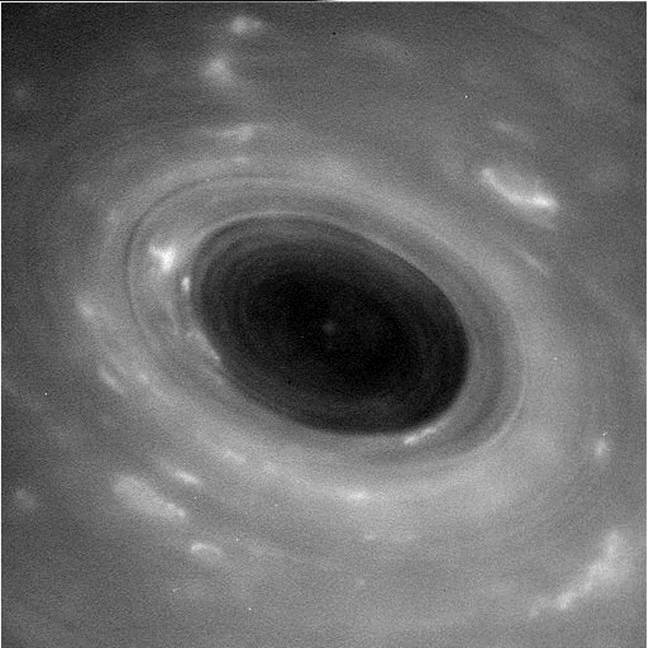 Stormy weather ... A snap taken by Cassini during its first ring plunge (Source)

The probe will make another 21 flybys inside Saturn's rings, approximately once a week, before it takes its kamikaze dive into the planet itself in September.

"In the grandest tradition of exploration, NASA's Cassini spacecraft has once again blazed a trail, showing us new wonders and demonstrating where our curiosity can take us if we dare," said Jim Green, director of the Planetary Science Division at NASA Headquarters in Washington, DC. ®