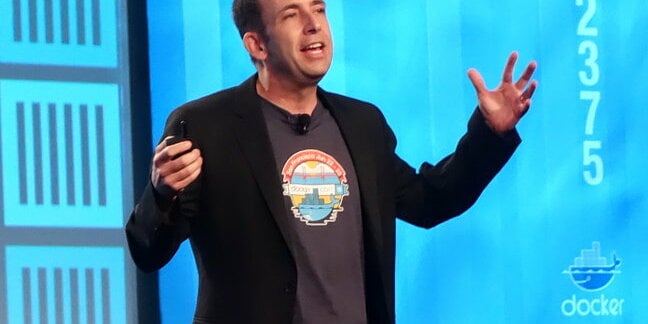 The move was oddly enough not, amid the Moby rebrand confusion, announced at DockerCon last month. However, the change has enterprise written all over it, starting with Docker founder and CTO Solomon Hykes' endorsement.

Citing Docker's traction in the developer community and enterprise market, Hykes in a statement offered the obligatory acknowledgement of Golub's work building Docker up and moved on to celebrate Singh's supposed salutary effect on sales.

"With Steve's unique expertise, we will build an organization capable of delivering on that demand, and serving our customers across the globe," said Hykes.

Dave Bartoletti, an analyst with research consultancy Forrester, in a phone interview with The Register expressed sympathy for Singh. "The poor guy has to figure out how to make money at Docker," he said.

Bartoletti observed that it's not easy for companies with roots in open source to make the transition to enterprise sales. "A lot of people in the community just bristle at anyone trying to make money," he said.

Bartoletti, however, observed that Forrester's data indicates that only 10 per cent of organizations with more than 1,000 employees are using containers in production. "We are really early in production deployment," he said.

The enterprise market represents Docker's possible path to profitability, but the company's behavior until recently placed product development ahead of the stability and hand-holding so beloved in the world of corporate IT. Docker's API changed frequently. Its support window was short. And the Docker Hub registry in the past was often cited for being too unreliable for production usage.

Such instability represents the price of innovation – at least that's how Docker spun it. But now Docker is staging a revival of Facebook's moment of maturation, when the social network, to undo developer alienation, traded its mantra "move fast and break things" for "move fast with stable infrastructure."

"'Move fast with stable infrastructure' means move slow to most people," said Bartoletti. "I do think Docker needs to slow down the rate of science projects and new communities they're launching to focus on blocking and tackling."

The foot dragging has already begun. Docker made its enterprise ambitions clear in March with the release of Docker Enterprise Edition, which gets updates at a more manageable pace than Docker Community Edition, and with the debut of its technology certification program.

But it doesn't necessarily follow that Docker will be as popular with enterprises as it has been with the open source community and early adopters.

"People want to use containers in the public cloud and they are going to have a lot of options," said Bartoletti. "I'm not sure people will take the whole Docker stack to Amazon or Google. That's where they have to win." ®