Unpaid tech contractor: 'I have to support my family. I have no money for medicines'

Who'd be a contractor when a payroll company 'suspends' payments with no explanation?

Your correspondent's inbox has never seen anything quite like this: I've received more than 50 personal emails from tech contractors affected by the “suspension” of payments by Plutus Payroll, an Australian outfit that pays tech contractors.

Register stories get lots of comments, but this level of mails direct to a journalist is very unusual. And plenty are heart-breakers from people left confused and worried by Plutus' actions, unsure if they can pay their bills or feed their families.

“My fortnightly payment which was due on 28th April was not paid and I am forced to borrow to pay the bills,” wrote one reader. “Its unfortunate what happened to Plutus but our family cannot be punished for their mistakes.”

"I have my rent and other dues and family to support. I am diabetic and no money for medicines. I hope some one listen to me," wrote another.

“I am really stressed about it as it has affected me and really want to know if you have any more information about it” is a typical request.

Some of those who've written to us are recent arrivals to Australia, yet to understand how institutions can assist and worried they'll not see their money and have to explain an oddity on their resumés.

Plenty of readers are asking us how they can recover their unpaid wages. There's some government advice here, but you'll probably need a lawyer if things go pear-shaped.

How can this happen?

This story starts with Australia's employment laws, which see lots of contractors officially employed by recruitment companies or payroll companies. The company at which the contractor works likes this arrangement as it means they don't have to put such people on their books. Recruitment companies and payroll companies charge for the service. Contractors generally like the convenience of having one employer even though they hop from gig to gig.

The system requires fluid payments. Companies who hire contractors pay the recruiter, which either pays contractors direct or pays the payroll company contractors prefer. If the cash stops flowing, contractors get crunched.

That's what's happened to around 1,000 contractors who elected to use Plutus as their paymasters: the company says it is in the midst of a completely unexplained “dispute” that leaves it unable to pay contractors, or receive money from recruitment companies, but is still solvent.

The Register has checked with the bank that Plutus clients say sends them their money – the bank says it is aware of no dispute.

One possible reason for the mess is that Plutus did not charge for its services. How it made money is therefore a mystery. Another scenario concerns the company's recent acquisition: perhaps its new owners are being denied access to some service Plutus could access as a standalone company.

Plutus is saying nothing of substance about the situation. A spokesperson tells us the company deeply regrets the situation but won't divulge anything about the dispute and has offered no details about when contractors can expect resolution. 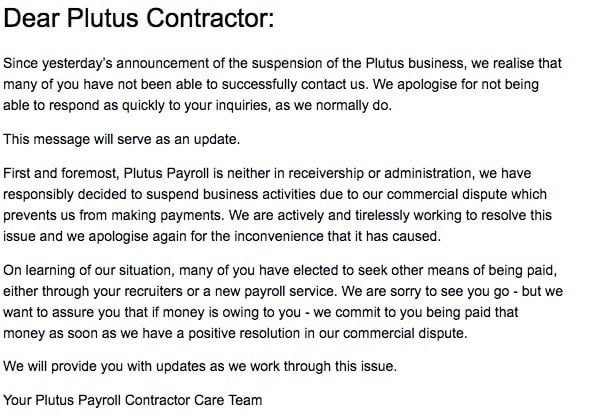 That letter did little to calm those owed money. Since it was sent, readers have contacted The Register with worries like whether Plutus has paid their taxes.

Payments to pension funds are an especially sore point. Australian employers must pay nine per cent of salaries into a designated pension account. Plutus, like most companies, makes that payment monthly. Multiple contractors have told us their April payments are AWOL.

A majority of the mails we've received complain of Plutus' silence. The Register has contacted the company's owner, which has not returned our calls. The company's spokesperson speaks only in the blandest terms, offering no timeline for resolution.

Bootnote: If you know more, feel free to write to me. I'm collecting the emails of affected contractors and mailing updates as soon as I learn anything new from Plutus, even before I write stories on the matter.