Windows 10 S: Good, bad, and how this could get ugly for PC makers

The other side of the show was the Surface laptop, which Microsoft’s Panos Panay claimed would be perfect for a schoolchild from joining their class through to graduation. It may well be so, but only if your parents are making Microsoft money.

The laptop can run an Intel Core i5 or i7, both of which could fry bacon if pushed hard enough. To combat heat, the laptop has a fan and copper venting ducts across the entire chipset. The aluminium casing also acts as a heat sink – although hopefully not like the Chromebook Pixel, which can become unpleasantly hot over time.

The screen the Surface team has used is wonderful, 3.4 million pixels and a 3:2 aspect ratio that is perfect for document viewing. Brightness was excellent, the resolution as good as anything else on the market, and the Gorilla Glass material should stand the test of time.

When it comes to ports, the Surface laptop one-ups Apple. It uses the standard Surface magnetic power cord, which is interchangeable with the Surface Book and Pro line, and has a mini-Display-port and a USB 3.0 socket, although not using the omnidirectional Type C connector.

Microsoft’s explanation for this is that people have a lot of devices that are still using USB Type 1 and 2 connectors. That makes sense, the shift to USB C has been long and slow and we’re still not there yet. There’s also a welcome 3.5mm audio jack – Redmond hasn’t fallen for the trend of abolishing this yet.

There are no speaker slots on the laptop. Instead Microsoft has stuck Dolby speakers under the keyboard beneath the enter and tab keys and sends sound up. We only had a brief hands-on session but it appears to work reasonably well.

One very odd touch is a fabric covering for the machine, excluding the touchpad and keys. Microsoft says this is to make the laptop more durable, but it feels more like a 1970s fabric seller gone mad. 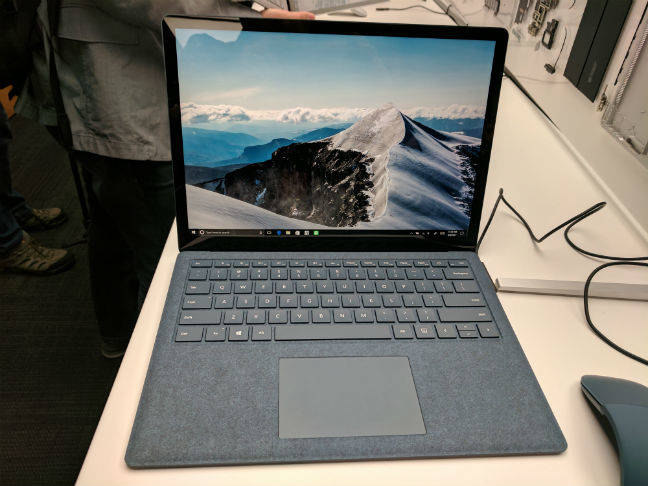 As for internal grunt, the laptop is available in a variety of specs, going from 4 to 16GB of RAM and up to 512GB of solid-state hard drive. On the RAM side that's really stingy – spending a grand for a laptop with 4GB of RAM is gouging at best. For Wi-Fi it runs 802.11ac, and there's also support for Bluetooth 4.0 built in.

Microsoft is claiming a 14.5-hour battery life for the laptop, which sounds too good to be true. Furthermore, it claims that once the lid is down and the laptop in sleep mode, it’ll retain power for days or even weeks.

A Microsoftie on the engineering team explained that when the laptop lid is closed, the system's state is suspended to the SSD and the computer powers down its main components. Leave the lid closed for more than four to eight hours, and even the low-power chips left on take will power down further and take just a trickle feed from the battery. Just enough is left on that opening the lid, ideally, rapidly springs the machine back to life.

While Microsoft touted the laptop as a student machine, the fact of the matter is that unless your parents are comfortably well off, you won’t be getting one of these. The base spec model is $999 (£780) and prices only go up from there. Which kind of makes you wonder why the Surface team was here, at this education-friendly event, in the first place.

While Microsoft may have billed Tuesday’s event as a marriage of hardware and educational software, it’s more complicated than that.

Windows 10 S has a clear purpose: to keep the next generation of humanity used to Redmond’s code and to embed itself as the standard for the future. Microsoft has signed up a large number of vendors to build the kit to run Windows 10 S, so why has it brought out its own hardware as well?

The fact of the matter is Microsoft seems to want to have it both ways when it comes to its computer-making partners. It needs vendors to build cheap laptops for schools if its new operating system is going to have legs.

So Samsung, Acer, HP, Dell and all can build the laptops that will run Windows 10 S, almost certainly at razor-thin margins and with little or no licensing costs from Microsoft. The system manufacturers will be hoping volume sales will make such laptops profitable.

At the same time, Microsoft wants to cream off the high-margin power laptop end of the market and keep the money for itself. In its last quarterly results, Surface revenues were down 26 per cent and Redmond is keen to see the hardware side of its business turn into a nice little earner again.

To say that the new Surface laptop is for kids is disingenuous at best. While there are some parents who will spend $999 plus tax on a laptop for their kids, those kinds of buyers are going to be few and far between, and there isn’t an educational establishment around that has the kind of funds to spend that much on laptops.

Instead, most of the Surface laptops will be bought by Windows power users and OPM buyers – those who use Other People’s Money, which usually comes from the accounts department. Most will quickly be upgraded to Windows Pro.

It remains to be seen what Microsoft’s manufacturing pals will make of all this. All produce their own high-end laptops and all are desperate to get into the kind of high-margin business that Apple has made its own and that Microsoft wants to grab.

Maybe they can make enough money on hardware for schools to make a decent living, but that’s going to be difficult. Meanwhile Redmond is looking to skim off the cream of the market. The stage is set for some very tense times if you’re building Windows machines. ®