Won't someone think of the children? They're bloody lightweights!

New figures on British drinking habits from the Office of National Statistics show teetotalism continues to rise, with our prudent youth leading the way in moderate alcohol consumption.

Don't expect to find that in the papers, though. With such a politicised subject, it's no surprise the ONS emphasises harm, and chooses to lead with a factoid designed to titillate Paul Dacre and the temperance movement. The headline stat is that "7.8 million people 'binged' on their heaviest drinking day".

But look a little closer and you'll find that headline-grabber isn't indicative of longer-term or broader trends.

The ONS sets quite a low bar for "binge" drinking. For women it's exceeding "six units on their heaviest drinking day (around three pints of normal strength beer or two large glasses of wine)". For men it's exceeding eight units. Bear in mind that a 5.2 per cent strength lager counts as 2.9 units. So three pints and you're a binger, according to the more-prudish-by-the-day UK government.

But even binge boozing is on the wane. 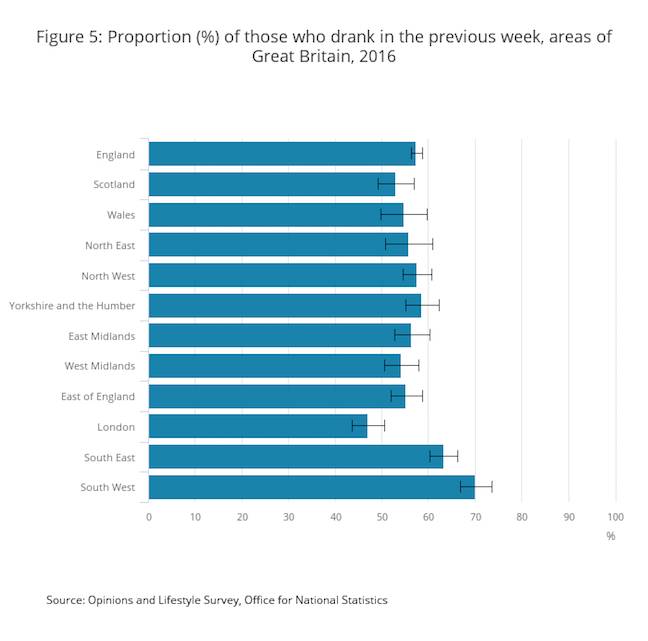 If your news consumption was limited to the Daily Mail and the BBC, a mouthpiece for temperance groups, you would probably have the exact opposite impression.

Teetotalism has increased across all age groups, but has increased more among... you guessed it, young people. The percentage of 16 to 24-year-old males abstaining from alcohol rose from 17 per cent in 2005 to 24 per cent in 2016, and females 21 per cent to 28 per cent.

In the 1960s, the authorities declared that a bottle of wine a day was a safe drinking threshold.

No, that is not a typo. Today, the official government guidelines state that five 250ml glasses of wine a week should be the upper limit for "safe" consumption. This isn't because wine has suddenly become more potent. French wine growers have not, to our knowledge, begun to produce super-concentrated wine, like skunk growers producing new and much powerful strains of cannabis every year. It's because puritanism has become our authorities' primary concern.

You can find the results here. The Excel spreadsheet has the nitty gritty. ®