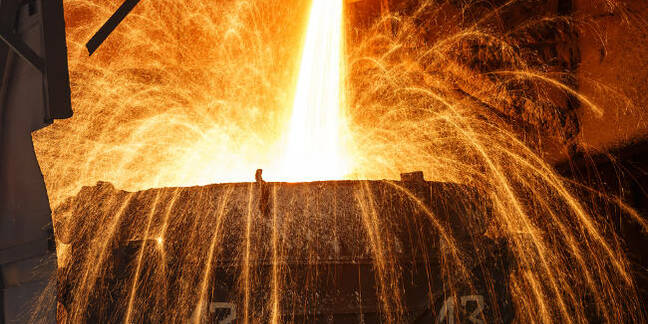 Owners of Intel's new i7-7700 processors say the chips have been randomly revving up to extremely high temperatures, and Chipzilla won't give the issue so much as a second look.

Reg reader Bastard-Wizard says that he and many other i7-7700 owners are finding that the chips will occasionally kick themselves into overdrive, running at temperatures as high as 90°C (194°F) at times. Intel says the i7-7700 will run at temperatures up to 100°C (212°F).

"My own chip suffers from it, (without any overclocking) which is quite an annoyance," our tipster writes. "This despite a delid modification and a proper water loop, resulting in the fans ramping up and down very frequently, and the temperature appearing to frequently spike near the danger zone."

The users note that these temperatures are even being seen in high-end gaming rigs with liquid cooling setups with the chips running at fairly low voltages.

"At this point though, with the temps most people are seeing, even good chips capable of hitting high clocks at low voltage still have very little headroom due to the thermal spikes these chips are displaying at even stock settings," notes user mrobscura.

"It's ridiculous that previous gen chips run cooler at equal or higher clocks despite needing to pump much higher voltage through them to obtain said clocks."

Making things worse, the users say, is that after more than three months of asking for a fix or even an explanation from Intel, the only response from Chipzilla has been a forum post more or less shrugging off the matter.

"The reported behavior of the 7th Generation Intel Core i7-7700K Processor, showing momentary temperature changes from the idle temperature, is normal while completing a task (like opening a browser or an application or a program)," an Intel rep told the customers.

"In our internal investigation, we did not observe temperature variation outside of the expected behavior and recommended specifications."

Even if the high temperatures don't pose a risk to the health of the chip itself, the effect of constant spikes will wear on the nerves of PC owners who see their cooling fans constantly spinning up to top speed, only to rev back down seconds later and repeat when the next temperature spike hits.

El Reg has asked Intel for comment on the matter, and the chip giant is sticking with the "it's a feature, not a bug" line.

"For the i7-7700K, momentary temperature changes from the idle temperature are normal while completing certain tasks like opening a browser or an application," a spokesperson said. "We've looked into the reports and have not seen any unexpected behavior or indication of performance impact."

For those annoyed by the constant on-and-off frenzy of cooling fans, Intel suggests you set the speed control so that the whirring kicks up gradually, rather than all at once.

We're sure customers will find that recommendation to be wholly satisfying and adequate for their concerns.

Chipzilla has to go it alone or turn to a partner