What augmented reality was created for: An ugly drink with a balloon

Or you could roll over and go back to sleep

Something for the Weekend, Sir? Dabbs (Mrs) and I are in bed. She is shaking my shoulder to wake me up.

“Not again,” I groan. “I’ve done it three times already.”

Disappointed, she slips out from under the duvet, dons a dressing gown and heads off by herself to locate the source of “the noise downstairs”.

Hearing bumps and creaks during the hours of darkness is just something you have to put up with. It never turns out to be anything sinister.

While I am led to believe that Americans live in thrilled anticipation of the night they are able to surprise a home intruder so they can blow the motherfucker away, it’s an extremely rare occurrence in Britain.

The noise invariably turns out to be the fridge rattling into life, the side gate creaking as an urban fox squeezes through or the flapping of a pigeon the cat has dragged in as a playmate. In our house, you can very clearly hear everything going on in every room anyway, from guests turning over in bed to the occasional farting of spiders in the garage.

Like me, just 28 per cent of married men bother to rouse themselves to investigate strange noises after dark, according to a survey conducted by Yorkshire-based paranoia merchants cctv.co.uk. Apparently, for 70 per cent of families, it’s the women of the house who do the checking.

Rather wonderfully, this means the remaining 2 per cent of families in the survey preferred to send their own children downstairs to face any potentially armed burglar. But then I suppose they could always make more children.

The reason I don’t like getting up in the middle of the night myself for this purpose is that I am afraid. That is, I’m scared of looking like a pillock – tip-toeing around my own home, brandishing a rolled-up copy of Judge Dredd The Megazine as a weapon, tripping over the cat and skidding on pigeon entrails – in order to separate a wine bottle from a jug in the fridge.

I am also put off by the tale recounted by my old karate instructor, who on one occasion after being left alone in the house was awoken in the early hours by bumps and low murmuring coming from his hallway.

Rather than rolling over and snoring it off as would be his wont in normal circumstances, he remembered that he was alone! The opportunity to act the pillock without anyone seeing! What fun! Springing into action hero mode, he boldly crept downstairs, stark bollock naked, brandishing a katana and making light-sabre noises.

As he reached the bottom step, the lights were flicked on and he was faced by his own teenage son, just back from the pub, along with his mates. And their girlfriends.

“They were all looking at my big sword,” he said.

Like my well-endowed friend, I most definitely would act differently if I was at home alone. Mild-mannered married men are often passive and willing to follow the lead of their partners when in their company but are determined to look and act the fool when left without the guidance of a superior intelligence.

This explains why you are tempted to accompany your partner sensibly on shopping trips to buy candles or visit their inlaws even though you know such things are going to be as enjoyable as gargling a fistful of E4 security torx.

Admit it, you’ll do anything to avoid being left alone at home.

Some of this might also help explain the thinking behind the concept of an augmented reality cocktail menu. 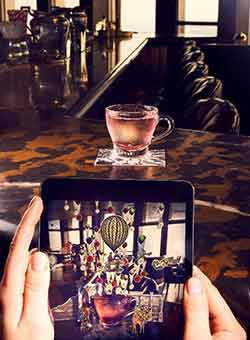 As a one-time business resident of the capital’s so-called “Silicon Roundabout”, I am no fan of cocktails. They are overpriced alcopops for the well-heeled, check-shirted and square-bearded, when any self-respecting child-man with barely two Bitcoins to rub together would opt instead for two cheap bottles of Smirnoff Ice during Happy Hour at Wetherspoon’s.

Nor am I a real ale bore. It’s just that cocktails try too hard to be “fun” and the very act of ordering one, let alone drinking it, in the company of others risks making me look like a pillock.

Which, of course, means that I’d be perfectly happy to do precisely this while on my own. And this is where the AR comes in.

As you can see from the mock-up picture, it works like other AR apps: you point your smartphone or tablet camera at a thing it has been programmed to recognise – in this case, a specific cocktail in its appropriately unique glass container – and a load of unreal 3D junk appears onscreen within the camera feed.

“Cocktails become interactive art,” insists the marketing blurb. Point your camera at one cocktail and the screen depicts it surrounded by “floating Victoriana-style balloons and Monty Python-esque imagery”. Point it at another and you see “a beautiful woman reclining on a chaise longue”. For the arty types, try a 'Wheatfields with Fizz', which appears on a backdrop of van Gogh paintings.

Now if I took Mrs Dabbsy to a wine bar, ordered cocktails and began buggering around with my smartphone to see what our drinks would look like accompanied by a tired lady or A View of Arles, I think the best reaction I could hope for would be her saying “Oh right” as she looks in the opposite direction for somewhere to sit down and recline.

No, this thing is ideal for me ON MY OWN and I can’t wait to try it out in the wrong place. Given enough encouragement (ie, the promise of publicity), the barman at any less glamorous venue might just be able to reproduce one of these cocktails too.

I would certainly love to see a “Dogstone Brew” surrounded by virtual balloons in an empty pub on a rainy day in Ashton. When I get bored of it, some three seconds later, I’ll head home.

In the meantime, can I get two pints of lager and a packet of crisps, please?

Alistair Dabbs is a freelance technology tart, juggling tech journalism, training and digital publishing. He has tried all entertainment applications for AR via smartphone and tablet and believes them all to be clumsy, pointless and utterly outdated. He reckons AR only makes sense when combined with hands-free VR hardware to create MR (mixed reality). Even if it does make you look like a pillock.