FCC: Take your spam and shove it, slacktivists!

Comment Some theoretical physicists have advanced the hypothesis that we may be living in a simulation, a kind of computer game. I wonder where they got that idea?

Here on Earth, online politics has been a game for some years. Long before gamification was a buzzword, the first "Googlewash" demonstrated how politics could be turned into a kind of sport, leading to the phenomenon of "clicktivism" or "slacktivism".

There are two related things in play here. One is the use of new digital tools to generate a fake or synthetic "consensus" by which real power can achieve its goals without being seen to pull the strings. Synthetic or "astroturf" groups pursue their agenda for them, not always aligning, but enough to create the illusion of popular legitimacy for a corporate issue.

The other factor is how shallow engagement is replacing real activism. Signalling one's moral goodness has gradually displaced rationally persuading people who don't agree with you, a job that sometimes had to be done in the freezing cold, far from an artisan Frappuccino outlet with Wi-Fi. For a clicktivist, the job of civic engagement is over and done at home in seconds. Click!

With real-world issues like jobs, health and (here) the EU, people take real-world action: they go on demonstrations and marches – things that oblige them to leave the house. It's with "digital rights" issues, shallow and lacking a broad consensus, that slacktivist methods have been pioneered and relentlessly pursued. Issues such as "copyright reform" or "net neutrality" are ephemeral to all but a few, but they do provide a slacktivist with the illusion of participation, with the bonus of "virtue signalling", showing their peers that they're a modern, deeply concerned net person.

On Monday, America's telco regulator, the FCC, called foul on one of the mainstay slacktivist tactics: bombarding public agencies with spam.

The FCC is seeking a replacement framework for the Title II imposed on internet companies in the dog days of the Obama administration. Part of the statutory process is public comments. Cue the clicktivists. The FCC was bombarded with net neutrality robo spam and junk in 2014 and it was so again at the weekend, clogging up the public comment submission queue. On Monday its public docket looked like this. 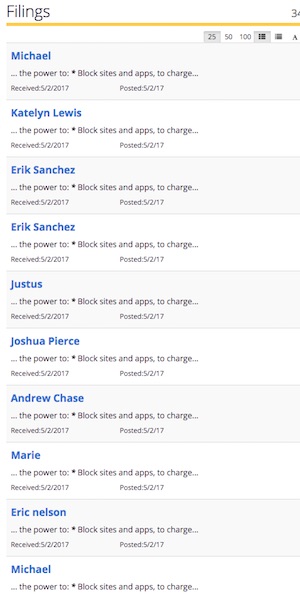 You are in a twisty maze of slacktivists, all alike

Enough's enough, the FCC responded. It characterised the flood of comments as "multiple distributed DDoS attacks".

Fight For The Future, a group described as an "astroturf" outfit which has boasted of bringing down the US Copyright Office website with 100,000 spam emails, is outraged and has demanded to see the logs.

Now a cursory analysis of the FCC docket reveals that the emails, many prompted by British cable TV "comedian" John Oliver to use the domain gofccyourself.com, a site that directed to the FCC, did indeed generate an embarrassing amount of rubbish.

It isn't all one way. For each spam there's an equal and opposite spam. Title II opponents also chipped in.

But it's the pro-neutrality campaigners who plumb the depths. Since the start of the year, they have engaged in a campaign of personal vilification against the FCC chairman – and this is evident in the docket.

"[F]—k you Ajit Pai for what you're are trying to do and I hope you die a horrible painful death with no remembrance to your name you cocksucka [sic]", writes one. "Ajit Pai looks and sounds like an Indian fraternity brother who exclusively f–ks underage women," wrote another.

At one time online petitions were welcomed as reinvigorating civic life. Parliament promised to debate any petition with 100,000 signatures, and debated 56 in the Parliament just dissolved. But officials and lawmakers have grown weary of this, not least because so many "respondents" are fake.

Seven years ago I interviewed the founders of 38 Degrees, a group that harvested emails to organise mass petitions. Was it concerned that many of the recipients could be fake?

"We don't want to put unnecessary hurdles in people's way. Asking for people's identity is a pretty massive process," a director told me.

Wind forward to last year and civil servants were being spammed by 38 Degrees campaigns – creating 10,000 extra man hours of work for the Department for Culture, Media and Sport. They were duly outraged when told the spam campaign would be ignored. The Department for Business, Innovation and Skills binned another misleading "digital rights" campaign by the UK's Open Rights Group for being, er, misleading.

And a petition with two million "signatures" demanding a rerun of the EU referendum was ignored last year after it emerged that 39,411 signatories came from Vatican City (population: 450), and 23,000 from North Korea.

If other agencies follow suit then what once was touted as a new avenue of expression and democratic participation will have been snuffed out – to widespread relief.

And for that outcome, well, you can thank the digital rights slacktivists. ®

USA kicks out China Unicom, but FCC still in pursuit