Docs use pen and paper after computers scrambled amid global outbreak 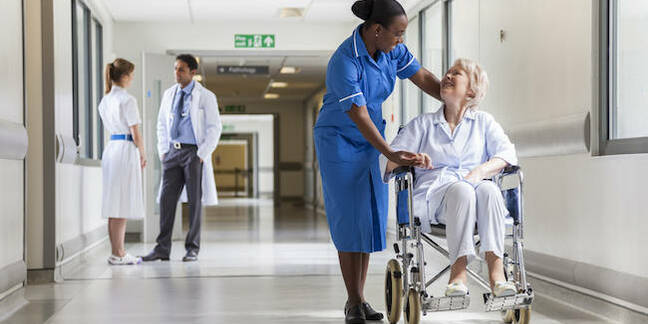 Final update UK hospitals have effectively shut down and are turning away non-emergency patients after ransomware ransacked its networks.

Some 16 NHS organizations across Blighty – including several hospital trusts such as NHS Mid-Essex CCG and East and North Hertfordshire – have had their files scrambled by a variant of the WannaCrypt, aka WanaCrypt aka Wcry, nasty. Users are told to cough up $300 in Bitcoin to restore their documents.

Doctors have been reduced to using pen and paper, and closing A&E to non-critical patients, amid the tech blackout. Ambulances have been redirected to other hospitals, and operations canceled.

It is understood WannaCrypt, which is raiding companies and organizations across the planet today, is being spread by a worm that exploits unpatched vulnerabilities in Windows machines – particularly MS17-010, an SMB bug attacked by the leaked NSA tool, EternalBlue. The security hole has been patched for modern Windows versions, but not WindowsXP – and the NHS is a massive user of the legacy operating system.

A spokesperson for NHS Digital said: "We're aware that a number of trusts that have reported potential issues to the CareCERT team. We believe it to be ransomware."

Here's the malware attack which appears to have hit NHS hospitals right across England today pic.twitter.com/zIAJ6wbAG5

We're aware of an IT issue affecting NHS computer systems. Please do not attend A&E unless it's an emergency. Thank you for your patience.

East and North Hertfordshire NHS confirmed in a press statement: "Today, the trust has experienced a major IT problem, believed to be caused by a cyber attack. Immediately on discovery of the problem, the trust acted to protect its IT systems by shutting them down; it also meant that the trust's telephone system is not able to accept incoming calls.

"The trust is postponing all non-urgent activity for today and is asking people not to come to A&E – please ring NHS111 for urgent medical advice or 999 if it is a life-threatening emergency."

It said the trust's IT specialists were working to clean up the mess.

"I'm led believe that there is a major attack underway on the NHS with systems down nationwide," one reader told us. "My wife is a GP and their systems were just shut down and they were told it was because of a 'National hack of the computer health care system'."

Payments appear to be being made to the Bitcoin addresses given in the NHS ransomware attack – which in turn confirms that the same strain of malware has infected Telefónica Spain, Gareth Corfield reports.

There are at least two addresses visible in screenshots of the malware reported by British sources.

One of those addresses, 115p7UMMngoj1pMvkpHijcRdfJNXj6LrLn, is visible in BBC tech editor Rory Cellan-Jones' tweet of a London GP's view of the malware:

Here's what a London GP sees when trying to connect to the NHS network pic.twitter.com/lV8zXarAXS

This same address is seen on computer screens in Spain and other countries hit by the WannaCrypt variant. A payment of 0.15 Bitcoin – worth roughly $266 dollars at the time of writing – was made to that address two hours ago, as the Blockchain tracker shows. It is not possible to say who paid this amount. The NHS attackers are asking for $300 worth of Bitcoin in ransom payments.

It said: "The investigation is at an early stage but we believe the malware variant is Wanna Decryptor. At this stage we do not have any evidence that patient data has been accessed. We will continue to work with affected organisations to confirm this. NHS Digital is working closely with the National Cyber Security Centre, the Department of Health and NHS England to support affected organisations and to recommend appropriate mitigations. This attack was not specifically targeted at the NHS and is affecting organisations from across a range of sectors.

"Our focus is on supporting organisations to manage the incident swiftly and decisively, but we will continue to communicate with NHS colleagues and will share more information as it becomes available." ®

Now read our analysis of the WannaCrypt epidemic.