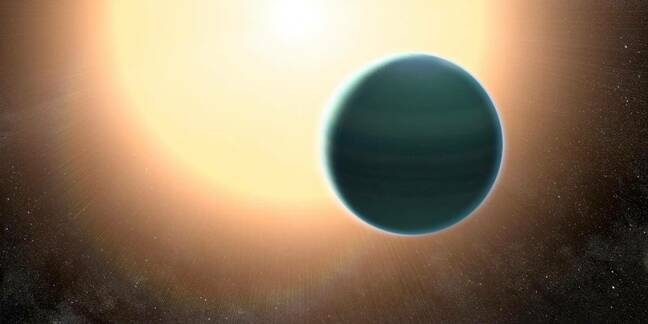 A strange, distant planet HAT-P-26b has an atmosphere full of water vapor, hydrogen and helium – and could change how scientists think of planet formation.

The exoplanet is hovering 437 light years away from Earth, orbiting a dwarf star twice as old as the Sun. It was found in 2011, and on Friday this week, more light was shed on the curious globe. It is described as a “warm Neptune,” since it has a similar mass to Neptune but is closer to its parent star and is balmy compared to our gas giant.

Using the data taken from the spectrometers on board the space telescopes Hubble and Spitzer, scientists have identified which wavelengths of starlight are absorbed by HAT-P-26b as it passes between its star and us. These measurements are key to identifying the chemical composition of the exoplanet’s atmosphere, and has strong signatures from water vapor, helium and hydrogen.

“Astronomers have just begun to investigate the atmospheres of these distant Neptune-mass planets, and almost right away, we found an example that goes against the trend in our solar system,” said Hannah Wakeford, lead author of the study and postdoctoral researcher at NASA’s Goddard Space Flight Center in Maryland, US.

Conventional theories about how a planet formed and developed are built around clear correlation between the mass of a planet and the abundance of heavy elements. Heavier planets are usually composed of lighter elements like hydrogen and helium and have lower metallicities.

Scientists believe the ice giants on the outer region of the protoplanetary disk rotating around our young Sun were bombarded by debris rich in heavier elements. But the gas giants were further from the edge so they soaked up lighter elements like hydrogen and helium.

HAT-P-26b defies this trend. A group of researchers led by Wakeford calculated the metallicity value for the exoplanet is closer to Jupiter than Neptune. A paper published in Science on Friday estimates it to be about 4.8 times that of the Sun.

It’s a rare find, only two other planets have the same property: HAT-P-11b, a Neptune-mass planet, and WASP-43b, a gas giant twice as heavy as Jupiter. Smaller planets usually lack sufficient gravitational pull to hold on to a gassy atmosphere.

“The next step is to measure other planets of Neptune-size, and see how the abundance of the water varies. Water is a proxy for oxygen, that in turn is a proxy for all elements heavier than helium,” Drake Deming, co-author of the paper and astronomy professor at the University of Maryland, told The Register.

Good luck pitching a tent on exoplanet WASP-76b, the bloody raindrops here are made out of molten iron

Raining irooooon, from a lacerated sky

Kepler 107c is way too beefy for its own good

Store-and-forward probe TESS warms up its cameras with a snap of 200,000 stars