Robot lands a 737 by hand, on a dare from DARPA 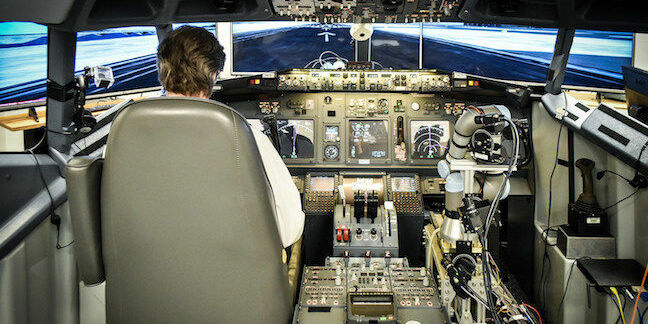 An outfit called Aurora Flight Sciences is trumpeting the fact that one of its robots has successfully landed a simulated Boeing 737.

Aviation-savvy readers may well shrug upon learning that news, because robots – or at least auto-landing systems - land planes all the time and have done so for decades.

Aurora's excitement is justified by the fact its robot sits in the co-pilot's seat and used various protuberances to wield the simulator's physical controls.

Which is just what US military DARPA wants to see under its Aircrew Labor In-Cockpit Automation System (ALIAS) program. The idea behind ALIAS is that military air crew can often find themselves with a lot to do under very stressful circumstances, but that automating their jobs with software and avionics is going to be very costly and time-consuming. Military craft are also likely to find themselves heading for destinations that lack ground-based augmentation systems to facilitate automated landings.

Which is what Aurora has built in the form of the rig depicted above (here for readers of m.reg) that uses “in-cockpit machine vision, robotic components to actuate the flight controls, an advanced tablet-based user interface, speech recognition and synthesis” to do the job.

Aurora's done this stuff before in actual flight, but for light aircraft. Simulating a 737 landing gets it closer to ALIAS' goal of adding a helping hand to crews of large military aircraft.

As ever, this stuff's a long way from being ready to fly. Which is just as well, given recent airborne shenanigans and perpetually-rubbish IoT security. ®