Fallen Australian payroll-services-for-contractors company Plutus Payroll convinced clients and staff that it had hit upon a business model that let it fund free payroll services with clever money market plays, commission deals with financial services companies and by selling workers' details to marketers.

But those revenue sources appear to have been a fantasy as Plutus has since been named as a vehicle used to perpetrate an AU$165m (US$122.5m, £94.5m) tax fraud scheme.

The Register has today spoken with several tech contractors who used Plutus for its payroll services. All requested anonymity, as they did not wish to be named now the case has become so prominent.

Most said that Plutus was attractive because it charged no fees compared to the 2.5 per cent of salary typically charged by payroll providers. Contractors told us that Plutus did a really good job - they were paid on time and the company had an excellent reputation in the industry. Several contractors told us they signed up after friends and colleagues raved about Plutus' service.

Plutus also put money in their pockets. One contractor told us she received a pre-paid credit card loaded with AU$100 for every month she stayed with the company. Such largesse suggested a thriving company.

Other contractors were given free or heavily-discounted private health insurance, saving them hundreds of dollars a month. Plutus also introduced its clients to financial services companies that helped customers to create salary packages that included leased cars. The Register has seen a Plutus client's pay slip that includes a salary sacrifice scheme for a new Apple Mac.

Such salary packaging is a staple of the industry and the contractors we spoke to said they saw Plutus' ability to organise leases or insurance as a sign of its competence and bona fides.

A few of the contractors El Reg contacted said they did pause to wonder if Plutus was perhaps a bit too good to be true and asked the company how it was able to offer free services. Plutus staff would explain that the company received commissions from financial services companies and would also on-sell their data to third parties and that they could expect to receive offers from marketers. Commissions of this type are common in Australia and as tech contractors can earn very good wages down under it's entirely conceivable that marketers would clamour for their contact details. 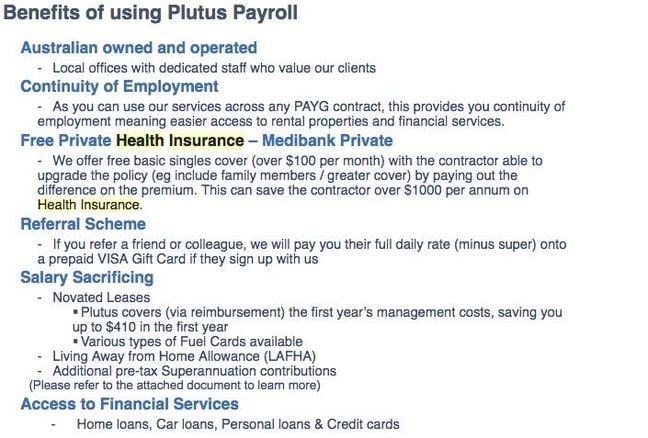 An email a Plutus Payroll worker sent to a contractor, explaining the benefits the company offered

None of the contractors we spoke to ever received any approaches by marketers, but none smelled a rat – perhaps because who notices the absence of spammy email or cold calls?

Those we spoke to generally said that once Plutus explained its business model, it sounded plausible at a time when businesses can seemingly thrive by funnelling referrals to insurance companies, affiliate marketing or providing data to enhance online advertising. That Plutus offered a no-nonsense service, delivered by pleasant and responsive people, completed the picture of a dare-we-say-it disruptive business that looked to have found a way to shake up Australia's payroll industry.

The view from inside Plutus

Staff were told similar stories of Plutus' clever methods of making money. The company's executives told Tim Munk, formerly Plutus' general manager of contractor care, that commissions from financial services partners were one revenue stream. He was also told that Plutus had found a cunning way to manage its cash flow so that it would receive wages owed to its clients and lend that money on the short-term money market at very high interest rates. Plutus would get that money back before it was due to make payments to contractors.

Short-term lending of this sort is not unusual: plenty of companies hit cash flow crunches and specialist lenders are eager to help. To Munk and other staff Plutus looked clever and credible.

Recruitment companies liked the story too, because Plutus paid them referral fees. Even recruiters that had their own payroll services organisations sent people Plutus' way.

Some of the contractors The Register has contacted allege that individual recruiters may have fibbed and said Plutus was contractors' only option. Munk says Plutus went out of its way not to mention the incentive scheme to recruitment companies that forbid such payments. But The Register understands individual recruitment agents stood to earn $1,000 per referral to Plutus, a tempting sum.

Munk told El Reg that from his vantage point, Plutus was performing well in mid-2016. He learned the company was to be taken over by Synep, the company alleged to have been the entity behind the tax fraud. Around the time of the Synep takeover Plutus' CEO left and Munk was given greater discretion on how to run the company. He was then dismissed in March 2017 on grounds that Plutus needed to cut costs.

Within two months Plutus' bank accounts had been frozen, contractors' pays stopped flowing and the mess we've chronicled since May 1st started to unfurl.

At the time of writing ten people are due in court over the alleged tax scam and many contractors are fearful for their futures.

Some contractors tell us they are still owed wages, despite Plutus promising to pay them. Some were overpaid and now tell us that all of their wages have disappeared from their bank accounts. Others tell us that just the right amount remains. Some still have too much money and expect terse letters from banks.

Many are worried that Plutus will not be able to issue correct tax documentation, a reasonably urgent matter given that Australia's financial year ends on June 30.

We're continuing to pursue this story with the Australian Taxation Office and recruitment companies. And we'll try to get to court in-between covering other stories. ®