He just smiled and gave me... er, a copy of the Ts and Cs 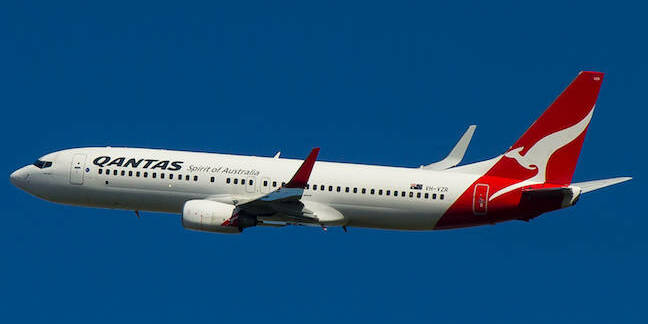 Here is a Qantas airliner that is neither an A380 nor even made by Airbus. It's not Vegemite, either, in case of doubt

The continent-sized country's flag-carrying airline is, rather stupidly, allowing the great unwashed to name its eight new Airbus A380s.

"We want their names to reflect the true Spirit of Australia," gushes the Name The Dreamliner page on their website.

Unfortunately for the airline, the yeasty spread company decided it fancied a slice of the action:

Help spread the spirit of 🇦🇺 around the 🌏 by naming one of the @Qantas ✈️'s - #VEGEMITE Head to: https://t.co/zARxol9G0O #VegemiteDreamliner pic.twitter.com/5m3IiIsAkQ

The tweet calls for Aussies to vote for Vegemite as the name of one of Qantas's new aircraft – to a rather lukewarm reception from the Great Australian Public.

One got into the spirit of the thing, replying: "Yes Vege McVegeface has been taken." Another pointed out the competition's terms and conditions:

@Vegemite @Qantas Good idea but we can't according to the T&Cs.

The entry must be:
free from any claims, inc. trademark claims, by other parties.

We suppose it's a slow day in marketing land Down Under.

Back in April Qantas hit Reg headlines for knocking AU$4,000 off the price of a Mac Pro through its frequent flyer shop. Though later withdrawn as a "pricing error", Qantas did offer its disappointed self-loading freight a 20 per cent discount coupon on the full price. ®

Of course it was a mistake, but the apology to 'buyers' included a 20% discount code

Pic Passenger reported it lost but when crew tried to find it, the business class seat struck!

What's the reason website's not flying?

Microsoft showpiece won't allow travellers to check in for flights

No place left to hide from your email

Amadeus airline booking system TITSUP and it's not ransomware

Australian airline QANTAS is partly offline, other carriers may be in trouble too

Qantas trials iPad in the sky