Bezos fumes as US bureaucracy holds his drone fleet back 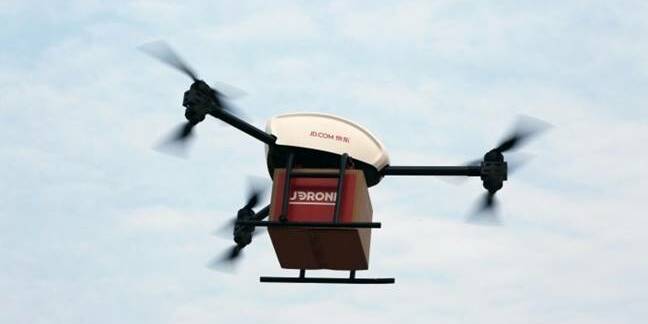 JD.com, China's largest online retailer, has announced it is beginning trials of a new delivery drone capable of carrying a ton of cargo to rural Chinese customers.

Just like Amazon, JD.com (also known as "Jingdong") has a vast network of warehouses and delivery networks crisscrossing the Middle Kingdom and, like Amazon, it sees drones as an ideal way to leapfrog over poor infrastructure to get the goods to its customers.

To that end, JD.com has set up a drone airbase in the Shaanxi province of central China and will use the massive drones to deliver goods over a 300-mile radius. It is also building a drone production line at Xi'an National Civil Aerospace Industrial Base, which has allocated five kilometers of airspace for testing the hardware.

"We envision a network that will be able to efficiently transport goods between cities, and even between provinces, in the future," said CEO of JD.com's logistics business group, Wang Zhenhui. "This is a milestone not only for JD, but for the entire transportation industry as we extend our logistics services to other shippers on and off of JD.com."

It's not just distances that the firm is looking to conquer. JD.com has 65,000 employees to handle its logistics and that comes up to a big wages bill. And with 235 million regular customers, there's a lot of stuff to deliver.

Amazon boss Jeff Bezos is well aware that drones could play a similar role in the US, but is currently stymied because the Federal Aviation Administration can't decide how to regulate the airways.

This has caused immense frustration for Amazon, which panned the FAA for taking 10 months to clear the flights of its first experimental drone. By that time, the applications approval was useless because the company had already built bigger and better drones.

As a result, Amazon has now shifted its drone development facilities to Canada and the UK, and progress has been somewhat slower than its Chinese rivals. Here at Vulture West we've had our own run-ins with the FAA's glacial progress, but advances abroad underscore the consequences of federal dithering. ®