Britain's on the brink of a small-scale nuclear reactor revolution

Sure, there are hurdles, but no £18bn hole on the other side like Hinkley Point 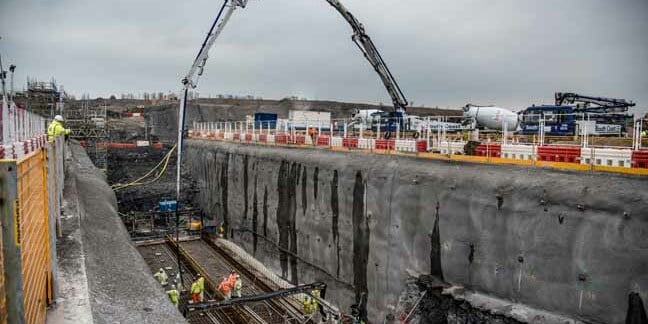 For the first time ever in April, the UK's data centres and clouds ran on electricity generated without burning coal.

The National Grid celebrated the news on Twitter with the promise of more coal-free days to come.

As coal-fired power plants wind down and with talk of blackouts in the air, nuclear is back on the table after the government gave the go-ahead last year for a third reactor at Hinkley Point in Somerset. Hinkley Point C is an £18bn, 35-year scheme that'll be operated by EDF. It took financial backing from the Chinese government to land.

However, a cheaper and smaller alternative is emerging if activity from British entrepreneurs and academics is anything to judge by – the small "modular" nuclear reactor, or SMR.

Mini reactors are nothing new – they have been installed in nuclear submarines since the 1950s, and Rolls-Royce produced them for the Royal Navy for decades.

An SMR is defined as producing 300MWe – just 10 per cent of what Hinkley Point C should provide.

SMRs are defined as reactor systems that are comparatively small, compact and entirely factory built. As a result, SMRs can be placed underground or underwater and moved for decommissioning. They employ "passive" safety systems that do not require human intervention – therefore fewer staff – and use a relatively small amount of nuclear material. There are a number of different SMR designs.

The SMR has some notable advantages – at least on paper. Perhaps the biggest is that SMRs can be sited in energy consumption "hotspots" around the UK, such as cities, and tap into using existing electricity transmission cables.

They're also much cheaper than a Hinkley. One Rolls-Royce-led UK joint venture is slated to cost £1.25bn. It's smaller, too. The plant would cover a tenth of the area that a traditional nuclear power station does.

No nuclear industry programme has yet produced a series of reactors along factory production lines, but a large order for SMRs could change all that.

Tony Roulstone, course director at Cambridge Nuclear Energy Centre, believes a production line operation could fulfil the promise of continuous improvements, of more efficient designs over the years, and the real prize of being manufactured in the UK.

By contrast, the earlier trend for buying renewable systems – wind turbines and solar cells – resulted in a huge import bill with around £3bn alone paid out under David Cameron's administration to big firms such as Siemens and DONG Energy.

And renewables are not always as "green" as its promoters claim. Large wind turbine blades made of fibre-reinforced polymer for example are impossible, or simply too expensive, to recycle, according to German research organisation Fraunhofer IWU.

But there's a deadline

Yet time is not on our side. About half of the UK's electricity capacity is due to be decommissioned by 2030.

This month, a forthright report from the Institution of Mechanical Engineers (IMechE) recommended that the UK "should focus on developing Small Modular Reactors, including at Trawsfynydd in Wales, to secure the country's future nuclear industry post-Brexit".

Trawsfynydd is the site of the UK's only nuclear power plant not built on the coast. This twin-Magnox station, closed in 1991, is instead on the shores of an artificial lake and is capable of cooling a 700MW reactor.

The site in Snowdonia National Park was identified as suitable by IMechE in a 2014 report and by Parliament's Welsh Affairs Committee last year.

Dr Jenifer Baxter, lead author of the report, said: "Pushing ahead on the demonstration and commercialisation of SMRs would be a key way for the UK to once again become a world leader in the sector."

This view was backed by a House of Lords committee that criticised the government's "failure to deliver on a multimillion-pound competition to develop mini atomic power stations," which it said "hurt the nuclear sector and risks international companies walking away from the UK."

In 2016, the combined costs of the Levy Control Framework (LCF) and carbon taxes surpassed £9bn. According to official figures, the Climate Change Act will cost the UK economy more than £300bn by 2030, costing households £875 each year.

SMRs also ensure that the British government can avoid a repetition of the growing fiasco over the cost of Hinkley Point. An expert in engineering capacity and financing energy plants, who spoke to The Reg on condition of anonymity, said Hinkley Point "could cost the UK as much as £81bn if maximum financing costs are included".

"I think the only reason the British government is going ahead with Hinkley Point is the hook it gives them over the French government during Brexit negotiations. If the French turn nasty, the UK can threaten to scrap Hinkley Point – as it is French contractors who will largely build it."

And yet SMRs face daunting development costs, and mind-boggling technical uncertainties. Like all nuclear sites they inevitably involve high costs, the problems of expensive decommissioning, the risk of accidents and waste disposal.

Sceptics include former government adviser professor Gordon MacKerron, who has described SMRs as "a classic case of supply-push technology development – no potential user of SMRs, mostly electric utilities, has expressed any serious interest in them."

The future energy market may be very different by 2025 when the first SMR could come on stream even under the most optimistic circumstances. The UK could by then be dependent on cheaper wind generation, with storage, electric cars, and other flexible technologies coming to the fore. Or the market could be dominated by abundant and inexpensive shale gas.

Crucially, the government has not been enthusiastic. Tom Wintle, deputy director of SMRs and nuclear decommissioning at the Department for Energy and Climate Change, told a recent conference: "SMRs will need to deliver energy cost-competitively if they are to play a part in the UK's future energy mix. The government is also committed to keeping down the cost of that energy for consumers, so there is a key challenge there for the nuclear industry as a whole and for SMRs." Hardly a ringing endorsement.

The Brit startups running with SMRs

If the government is hoping for a prosperous export market for SMRs, it will face a variety of hurdles. First, a total of nine countries are currently involved in SMR development, including newcomers such as Argentina. Secondly, there are no current licensing standards. The World Nuclear Association stated: "Design certification, construction and operation licence costs are not necessarily less than for large reactors, placing a major burden on developers and proponents."

It added that several developers had utilised the Canadian Nuclear Safety Commission's pre-licensing Vendor Design Review process, which, in Phase 1, involved 5,000 hours of staff time – an expensive process. And yet, and almost unknown to the public, a number of remarkable SMR projects have started in the UK.

One is Tokamak Energy. In late 2016, amid the Oxfordshire countryside, the UK's newest fusion reactor was turned on for the first time. The reactor aims to produce a record-breaking plasma temperature of 100 million Celsius for a privately funded venture. This is almost seven times hotter than the centre of the Sun and the temperature necessary for controlled fusion.

Its CEO is Dr David Kingham, former managing director of the highly successful startup incubator Oxford Innovation back in the mid 1990s. David has seen hundreds of startups come and go and yet is willing to back this high-risk project.

"Our ST40 is a machine that will show fusion temperatures are possible in compact, cost-effective reactors," he said. "This will allow fusion power to be achieved in years, not decades. We are already halfway to the goal of fusion energy; with hard work we will deliver fusion power at commercial scale by 2030."

The big boys are also prowling. That £1.25bn Rolls-Royce consortium includes Amec Foster Wheeler, Nuvia and Arup. Rolls-Royce has submitted detailed designs to the government for SMRs capable of generating 220MW, and that could be doubled up to 440MW.

US SMR specialist Nuscale, based in Oregon, is developing a new design based on technology that originally came from research by the US Department of Energy. Nuscale has even declared an interest in developing manufacturing capability and capacity in the UK.

Other startups include Transatomic Power and Microsoft co-founder Bill Gates' Terrapower, with a Chinese research programme emerging in the background.

In the 1960s, 25 per cent of the UK's power capacity came from nuclear. Schoolchildren were told this was the power of the future. If SMRs can overcome the hurdles, they could take us – and our data centres – back to that future. ®

Meanwhile: IBM Power processors to appear in a Google Cloud near you, if you ask nicely

Also: 2010 server products to survive into 2021 as overstretched admins given more breathing space

Warehoused servers were ready, but then the world discovered Teams