Your roadmap to the Google vs Oracle Java wars

'It is happening again'

Analysis The final lap nears in Oracle's epic seven year battle with Google over Java. It's reached the Federal Appeals Circuit, where Oracle is confident that three appeals judges with a strong track record of upholding IP will decide in its favour.

In many ways, it's a surprise that Big Red didn't win ages ago, with the two warring parties then reaching a licensing agreement (although they may still be tussling over damages.)

Google prevailed in two earlier bouts largely to the directions and interpretation of one Judge William Alsup: it is he who presided over both the 2012 and last year's retrial, and he who instructed the jury to get the Chocolate Factory off the hook by refusing to invalidate its "Fair Use" defence. In fact, he went further, and pretty much advised the jury that was the only correct answer.

The fair use finding dumbfounded many legal experts. Google had copied 600 classes, 6000 methods and 11,000 lines of Java to create Android. Andy Rubin's Android team bluntly described it as a "Java OS" and the team recommended on multiple occasions that they take a licence from Sun.

For example, the discovery process unearthed a slide from July 25, 2005, with a bullet point: "Must take license from Sun" as one of the bullet points of a meeting agenda. Rubin had personally urged Larry Page: "My proposal is that we take a license that specifically grants the right for us to open source our product. We'll pay Sun for the licensee and the TCK [Technology Compatibility Kits]." 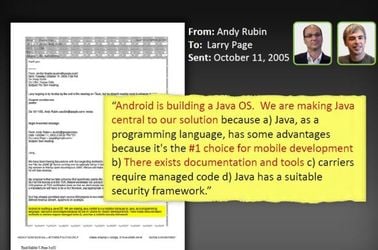 By 2007, the Android team was cooling on the idea, though, and took a kind of catch-us-if-you-can stance.

"I’m done with Sun (tail between my legs, you were right). They won’t be happy when we release our stuff, but now we have a huge alignment with industry, and they are just beginning," Rubin wrote.

In 2010, with Android set to be an industry success, and with Oracle now owning Java, Page requested a new evaluation.

“We need to negotiate a license for Java,” engineer Tim Lindholm concluded.

Android remains the only Java system in the world that doesn’t have a Sun/Oracle Java licence, as we noted in 2012.

'But we made everything beautiful'

In its defence brief filed on Monday, Google argues that it only copied a tiny weeny bit of Java "... a small fraction of the declarations in J2SE’s Application Programming Interface (“API”)—only the declarations for functions that Google determined to be key for mobile phones or that were necessary to make meaningful use of the Java language..." less than one half of one per cent.

But it created something wonderful and amazing, the likes of which the world had never seen before.

Android was “revolutionary,” and “completely different from any other approach and something that no one else, including Sun or Oracle, had ever managed to do."

That might be over-egging the pudding. Nevertheless, it warns that this is no time to start limiting Fair Use defences:

"No court has ever overturned a jury’s determination on fair use. This is no time to start. Oracle does not challenge the jury instructions, which were based on this Court’s opinion. And Oracle’s challenge to the sufficiency of the evidence is meritless because the record contains more than substantial evidence to support the verdict on this fact-bound question."

So which way will it go?

Can Fair Use really cut it, here?

Luckily a map has already been provided in one amicus filing - not from a trade group but from 13 copyright scholars. They explain four key hurdles that a successful Fair Use must overcome: and largely leave it to you to decide whether Google's Android succeeds.

The case has generated much chaff and diversionary material - such as the notion that "copyrighting APIs" is new. This is only attractive superficially, if you think custom trumps law. There has never been a time when APIs have not been "copyrightable", and therefore the basis of a claim like this, by Oracle. The custom in Silicon Valley was to encourage adoption of one's APIs, but copyright has always had this flexibility built in. You can encourage a photo of yours to circulate on Twitter, as you grant permission and set rates for newspapers, as you deny its use to newspapers you don't like. Your stuff - you license it as you wish.

Google's lawyers naturally raise this too: "Witnesses testified that practice was consistent with industry custom that API specifications or declarations were not proprietary" as if "custom" absolved Google of the legal requirement to take out a license after copying.

If you read The 13 Scholar's guide in full - it's here (pdf) - you'll have a head start over social media pundits or tech bloggers, and it's a great layman's guide to the contours of Fair Use.

So here's a summary of the four key points.

Firstly, Fair Use has to be transformative and not merely a copy. Transformative means a new work for a new purpose. Cloning big chunks of a mobile OS and making it fantastic, and saving the world, is something you can use on a bumper sticker, but not in Court. In any case, the District Court had concluded the copying was done to achieve the same purpose as the original, to create an OS.

"Even the seemingly expanded view of what is 'transformative' does not change the fact that using copyrighted material for the 'same intrinsic purpose' as the original is not transformative", they note.

"...the district court concluded that Google used the declaring code and structure, sequence, and organization that it copied from Oracle for the same purpose and to achieve the same functions as Oracle. Thus, Google’s use is not transformative."

Google argued that making Java SE a mobile OS was a new 'context', but the 13 argue that this is just an implementation: by definition, an infringing derivative work.

Secondly, if the work being copied is creative, rather than factual, "the less likely infringement will be excused by fair use. Software code is creative."

Thirdly, the Court should consider the extent of copying the protested the work in deciding whether to allow a Fair Use defence to stand. Google says only a bit was copied, but 6,000 methods "constitutes the heart of Oracle's work". This should go against Google, they advise.

Fourthly, and this is a principle enshrined in global treaties for decades, is the issue of whether it prejudices the owner's market prospects.

"Here, Google created a product that competed with Oracle’s copyrighted work, which caused a decrease in Oracle’s licensing market and also prevented Oracle from participating in developing markets. Accordingly, the fourth factor should weigh against a finding of fair use."

At a copyright case, a Court aren't interested in whether Sun was being a hippy about licensing, or whether Sun was inept at creating a mobile version of Java. Both may be true, but neither works as a legal defence. Property rights allow you to be inept with how you exploit your property, and don't provide an excuse someone to copy without a licence.

"In line with these decisions, the fair use defense should not excuse the infringement in this case, where Google copied thousands of lines of Oracle’s code verbatim to use for the same purpose in competing products," the 13 conclude.

"Software coding is a highly creative field. The recent exponential growth in technology is a direct result of such creativity. Expanding the fair use defense to excuse appropriation of software code for commercial gain will harm both creators and the public, as creators will have less incentive to develop new software."

With Google working on an Android successor, Fuschia, it has its Plan B in place. Fuchsia, according to original Android kernel developer Brian Swetland, is mostly BSD. ®

You're tired of best-of-breed databases, apparently

The bad guys looking after the good guys... or is that the other way round? Life's so complicated