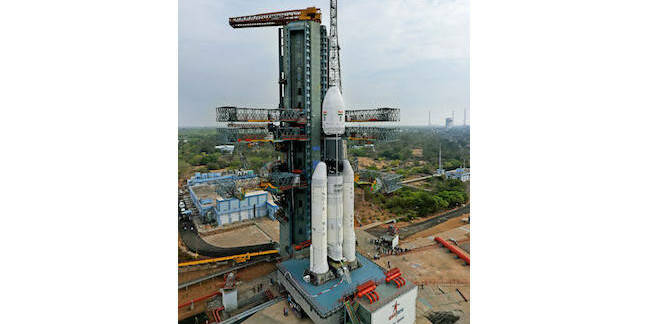 The Indian Space Research Organisation has set June 5 as the next milestone in the country's ambitions to build a heavy-lift rocket.

That's when ISRO's Geosynchronous Satellite Launch Vehicle (GSLV) Mark III is due to hoist a 3,136 kg GSAT-19 satellite to a geosynchronous transfer orbit, the first time a launcher in the GSLV series has had such a large payload.

The vehicle is currently in place at the Sriharikota rocket port in Andhra Pradesh.

GSLV Mk III is still a relatively small heavy-lifter, as the table below shows:

If the destination is low-earth orbit, the GSLV can lift an eight-tonne payload.

For this flight, the GSAT-19 payload has Ka-band and Ku-band communications systems, a Geostationary Radiation Spectrometer, and it will be a test bed for the Indian-developed I-6K modular satellite bus.

It's also the first time the country will launch a rocket using cryogenic fuels – a liquid oxygen and liquid hydrogen third stage – in addition to two 205 tonne strap-on solid-fuel boosters, and liquid propellant engines as the second stage. ®

Obit Two weeks after he went public with illness, philanthropist Alt-F4s from this simulation we call reality

It's 2019 so, of course, you can now (kinda) play Pictionary with dead Microsoft cofounder Paul Allen's AI bot