Microsoft co-founder Paul Allen has shown off the “Stratolaunch”, a colossal aircraft he hopes can soon help to hoist satellites into low earth orbit.

Allen's company of the same name has been working on the craft since 2011, with the help of Scaled Composites.

The result of their efforts is 238 feet long, 50 feet tall and has a wingspan of 385 feet [Allen likes Imperial measurements – Ed]. The wingspan is the largest ever built, topping even Howard Hughes' “Spruce Goose” aka the “Hughes H-4 Hercules.”

The Stratolaunch needs that colossal wing, and six engines typically used for the Boeing 747, because Allen wants it to carry up to 550,000 pounds of payload. His plan calls for the plane to “take off from a runway and fly to the approximate cruising altitude of a commercial airliner before releasing a satellite-bearing launch vehicle.” 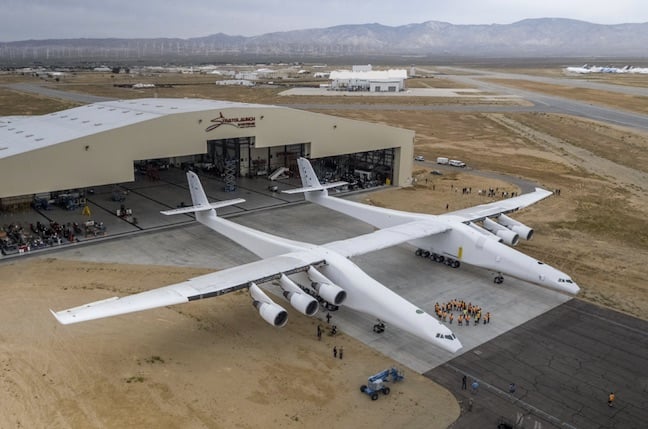 As the illustration above (here for m.reg readers) shows, the launch vehicle(s) will be mounted beneath the central wing joining the two fuselages.

Plenty of folk have pointed out the advantages of hoisting rockets a little higher into the atmosphere, but Allen emphasises flexibility of launch locations as one of the Stratolaunch's strengths.

“Stratolaunch is designed with a flight radius of up to 1000 nautical miles and can launch from different runways, it will offer scientists, businesses and space entrepreneurs much greater flexibility, such as the potential to evade local weather problems that often impose untimely delays on traditional vertical rocket launches.” 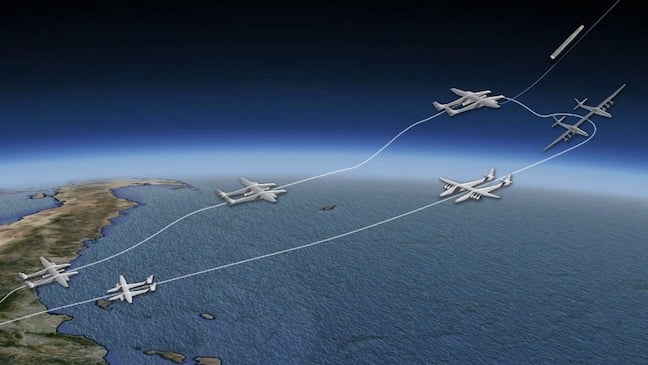 By visiting different airports, it may also offer access to different orbits.

The Allen quotes above come from a June 2016 piece he penned on LinkedIn, which ended “Look for those hangar doors in Mojave to open soon.”

Soon turned out to be 31 May and the opening was for the chore of testing how to refuel the Stratolaunch. Other tests are expected “during the coming months” and the company plans a “first launch demonstration as early as 2019.”

By that time it may have stiff competition: DARPA plans a sat-launching space plane capable of ten launches in ten days while rocketeers at an outfit called Vector think they can launch 100 small satellites a year. ®

When the tracking hits your eye like a big pizza pie, that's a priori
Security6 Oct 2022 | 1

Remember the bad old days when getting X settings wrong could fry your CRT? They're back, kinda
Personal Tech6 Oct 2022 | 4

I think we can handle one little Russia. We sent two units, they're bringing any attempts down now
Security6 Oct 2022 | 3