There's no way this could go horribly, violently wrong... right? 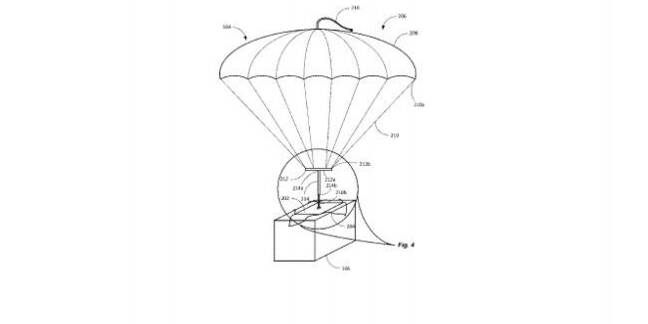 Amazon has been given a patent on a system to deliver packages from the sky via on-board parachutes.

The Bezos Bunch has filed with the US Patent and Trademark Office and been granted a patent for a system that will cram parachutes into shipping labels.

The on-board parachute functions as you would think: an adhesive label on the package will open up a parachute when dropped from an aircraft – presumably a delivery drone.

Embedded parachutes would be a logical extension to Amazon's research into drones as delivery vehicles. In such a scenario, the drone would release a package that, via its delivery label, would deploy its own parachute to make a soft landing at the intended address. It would also solve some of the issues surrounding drones flying at low altitudes near power lines and other potential hazards.

The patent doesn't say what safety measures would be employed to make sure a wayward package doesn't fail to deploy its 'chute and brain an unwitting pedestrian or resident.

It is at this point worth noting that a patent is a long way from a finished product, and in many cases the devices described in patents never make it to the prototype stage in any form, let alone a finished product.

Still, the filing should give some indication as to just how far Amazon is looking to go with its drone delivery program. The retail giant does indeed seem to be at least entertaining the idea of deliveries being instantly processed and dropped from the sky with little, if any, human interaction needed. ®

Borrowers can score between £500k and £5m if they have a track record, co-investors, and can afford eight percent interest

Who said open-source alternatives? Haha, no one here said it, you must have imagined it