Wowee, it's Samsung's next me-too AI gizmo: The Apple HomePod

Yet another belated entry into the creepy interactive snooping speaker world 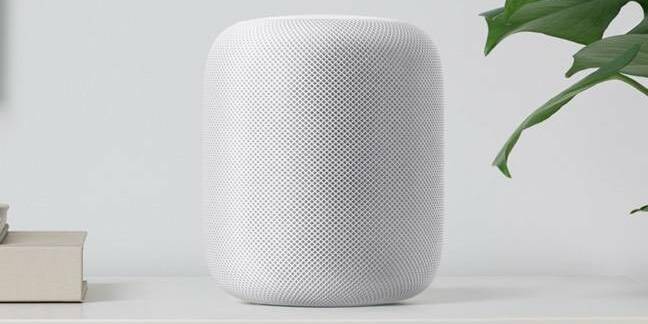 WWDC Apple has joined Amazon, Google, and Microsoft in the race to plant microphones in people's homes.

(Presumably, Samsung is only just around the corner with something similar, too.)

At its annual developer conference in San Jose, California, on Monday, Apple promised its personal assistant software Siri a second home (or third or fourth if you count her macOS or watchOS presence). Having housed her up in iPhones for the past six years, her Cupertino, California-based sugar daddy rewarded her with residence inside a mic'd speaker called HomePod.

Like Amazon Alexa in her Echo, Google Assistant in her Home, and Microsoft Cortana's planned appearance in Harman Kardon's forthcoming Invoke speaker, Apple Siri in her HomePod represents an effort to take a voice-based computing interface beyond the desktop and mobile devices.

The HomePod has a face for radio. It resembles a large ball of twine, at least the white version. It also comes in hairball gray.

Apple's approach, as befits its investment in music, focuses on the output, the speaker. HomePod is cast as a complement to Apple Music, a sensible marketing strategy considering that these bi-directional audio devices haven't yet really found a reason for being beyond demanding that stuff be brought to one's door.

Of course, Siri via HomePod will be able to send text messages, recount news and weather updates, and manipulate HomeKit-enabled devices like thermostats and garage door openers. But not everyone wants to buy networked lights just to tell Siri to toggle them. Music, if not the killer app for IoT hubs, is at least something more than a handful of people care about.

"Just like iPod reinvented music in our pockets, HomePod is going to reinvent music in our homes," said Phil Schiller, senior veep of worldwide marketing.

Apple has been here before, with the iPod Hi-Fi, a semi-portable speaker system panned for its weight, lackluster features, and high price ($350) when launched in 2006.

That happens to be the planned price of the HomePod, slated to debut in December. While it's significantly more expensive than Google Home ($130) or Amazon Echo ($180), the HomePod compares favorably to competing speakers like the Sonos 5 ($500) and perhaps to the Cortana-infused Harman Kardon speaker, which has yet to disclose a price.

Apple made much of the HomePod's capacity to improve the experience of listening to music, and its forthcoming operating system updates will help in that regard. Its software's pending support for multi-room audio could make managing multiple speakers in conjunction with multiple audio sources less vexing.

Staking out a position on Apple's oft-visited privacy high ground, Schiller offered reassurance that the HomePod doesn't record anything until the user addresses Siri.

Amazon Echo and Google Home work the same way, maintaining active mics (unless disabled by the user) that supposedly don't transmit data until the invocation phrase has been detected. But Apple's disinterest (or arguably incompetence) in advertising makes it a more plausible privacy partner than its peers.

Security researchers consider the presence of these devices a potential privacy risk, though perhaps it's less likely than being fooled by a phishing message or revealing too much via social media.

Alongside risks, there may be benefits. In a recent murder investigation, Arkansas authorities sought audio data captured by an Amazon Echo. Amazon resisted the demand, a necessary step to reassure potential customers. Then the defendant in the case subsequently allowed authorities access to the voice recordings Amazon had captured, turning the privacy risk into a bid for exoneration.

Beyond evidence, HomePod and its ilk may eventually become indispensable channels to summon service from a cloud of connected devices. Until then, they'll at least be able to play tunes on demand. And that counts for something.

The HomePod will be available in Australia, the UK, and the US when it ships in December. ®