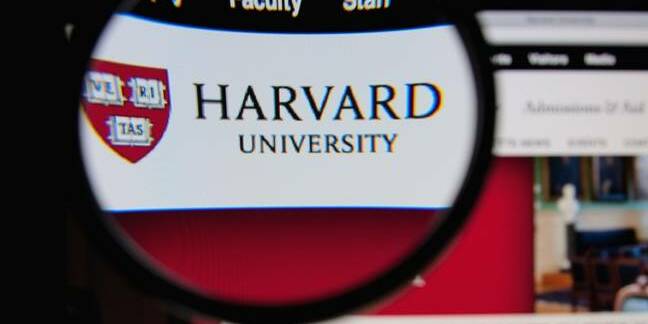 At least ten students due to start at Harvard this fall have had their admission offers torn up – after they swapped offensive piffle online.

Specifically, the cyber-garbage was posted on the official Harvard College Class of 2021 Facebook group, set up for applicants who have been accepted by the Ivy League university. Some members of the group formed their own sub-groups on Facebook and one of these landed the young trust-fund, er, geniuses in hot water.

"Someone posted about starting a chat for people who liked memes," forthcoming student Cassandra Luca told the Harvard Crimson. "They were like, 'Oh, you have to send a meme to the original group to prove that you could get into the new one'," Luca said. "This was a just-because-we-got-into-Harvard-doesn't-mean-we-can't-have-fun kind of thing."

A number of students went to the uni's authorities, who stepped in to examine the allegations. Members of the group were questioned as to the exact material they had posted.

"The Admissions Committee was disappointed to learn that several students in a private group chat for the Class of 2021 were sending messages that contained offensive messages and graphics," reads a copy of the Admissions Office's email obtained by The Crimson.

"As we understand you were among the members contributing such material to this chat, we are asking that you submit a statement by tomorrow at noon to explain your contributions and actions for discussion with the Admissions Committee."

By mid-April the admissions staff had identified at least ten individuals who had posted particularly offensive comments. Their hopes of becoming members of the great and the good at Harvard have now been dashed.

"I appreciate humor, but there are so many topics that just should not be joked about," Jessica Zhang, an incoming freshman who joined both chats, wrote in an email. "I respect the decision of the admissions officers to rescind the offers because those actions really spoke about the students' true characters. I do not know how those offensive images could be defended." ®