No hypersonic railguns on our ships this year, says US Navy 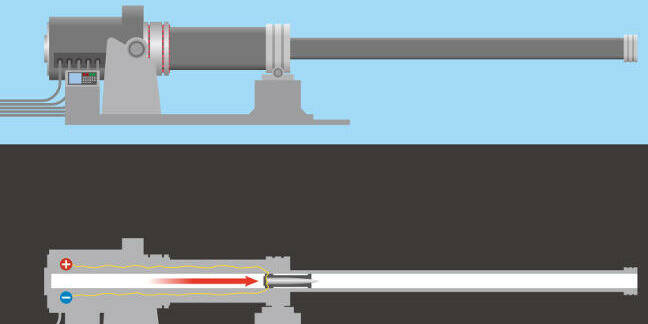 The US Navy is not bolting its new electromagnetic railgun to any of its warships in the coming year, a move sure to disappoint those who rejoice at innovative methods of blowing stuff up.

The naval service's budget for fiscal year 2018 contained no funding requests for putting the USN's electromagnetic railgun (EMRG) on a ship, according to respected defence industry magazine Jane's Defence Weekly.

Instead, we are told, the USN will concentrate on further R&D before putting a ship to sea packing a hyper-speed railgun.

The BAE Systems-designed EMRG project scooped the British firm $34.5m back in 2013 when the contract was announced.

The USN's interest in railguns seems to be primarily as a point defence mechanism, blasting anti-ship cruise missiles and ballistic missiles out of the skies before they reach the target vessel. Seven years ago the maker of the USN's Blitzer railgun boasted that it was "tactically relevant", which seemed premature even back then.

Russia in particular is becoming increasingly uneasy about the Western lead in defence technology, judging by its claims to have tested a Mach 8 anti-ship missile – though the only sources for that are outlets such as ITAR-TASS, one of Russia's state-sponsored news agencies. Disinformation, as most folk in the West know, is a key part of Russian foreign policy.

Railguns work by using electromagnetic energy to propel a projectile at super high speeds – in the case of the EMRG, the projectiles reach Mach 7. The resulting kinetic energy causes devastating damage once it hits something, particularly compared with current explosives-based propellant technology. In simple terms, the faster your Long Rod Penetrator bores its way into the target (stop sniggering at the back, this is serious defence technology), the more energy it carries with it and the deeper it goes – enabling an explosive charge on the rear of the projectile to be carried deep into the vulnerable heart of an enemy ship, tank or bunker.

The drawback of current railgun tech is that it needs serious amounts of electrical power to get the projectile up to speed – the sort of output you can only get from having your own dedicated generator on site... such as a warship's power plant.

In a similar vein, navies around the world, including our own here in Blighty, have been developing giant frikkin' laser weapons. The current demonstrator is called LDEW (Laser Directed Energy Weapon) and is run by the Dragonfire consortium, led by EU missile bods MBDA. ®