WASP-67 b and HAT-P-38 b are two far-flung exoplanets orbiting near-identical stars at similar distances. Their size and temperatures are also pretty close. So, naturally, astronomers thought that their atmospheres wouldn't be too far apart. They were wrong.

"We don't see what we're expecting," said Giovanni Bruno, a postdoctoral researcher at the Space Telescope Science Institute in Baltimore, Maryland, in a statement.

WASP-67 b and HAT-P-38 b are a special breed of exoplanet called "hot Jupiters" because, like their closer-to-home namesake, they were born on the outskirts of their star systems, but decided to pack up and move to warmers climes – over 538°C (1,000°F) – right up against their star. Scientists analyse their atmospheres because it might give clues to how they were born and grew up.

Astroboffins used the Hubble Telescope's Wide Field Camera 3 to measure the planets' chemical compositions. By analysing the signature of water in each, they discovered that even though WASP-67 b is really similar to HAT-P-38 b, it's much cloudier. 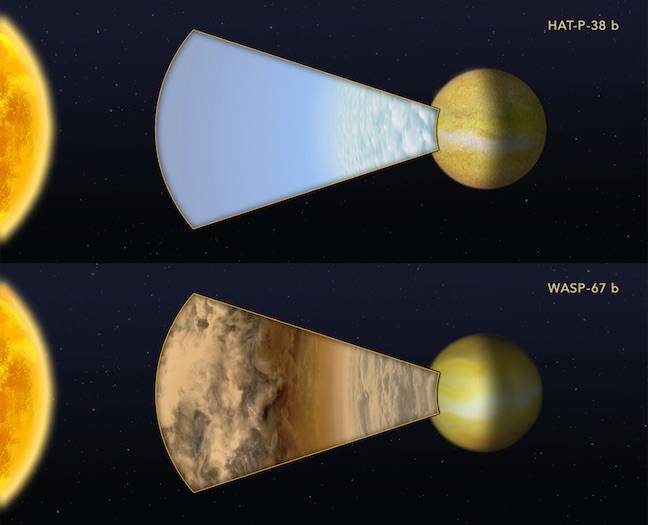 But these clouds are probably quite different to the ones on boring old terra firma, which are full of lightweight water vapour and ice crystals. On these warm exoplanets, they are likely formed of heavy molecules such as sodium sulfide and potassium chloride.

The researchers presented their work at the 230th American Astronomical Society meeting in Austin, Texas, on 5 June.

However, Nikolay Nikolov, an astronomer at the University of Exeter in the UK who studies the atmospheres of exoplanets but was not involved in the research, was unfazed. "It doesn't seem very surprising to me," he said, adding that it's only confirmation of the huge diversity of all the kinds of exoplanets out there.

Further experiments with Hubble and the upcoming James Webb Space Telescope are needed to find out what exactly happened to exoplanets such as WASP-67 b and HAT-P-38. "We need to understand why we find this difference," Bruno said. ®