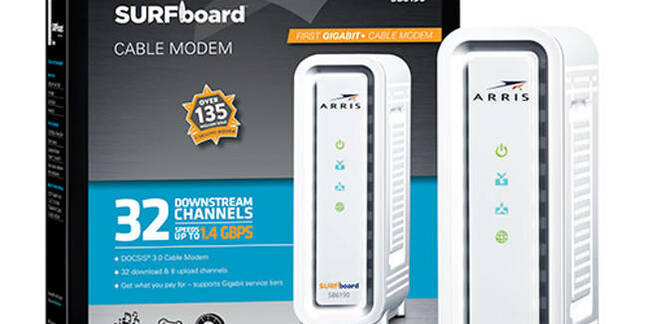 The legal battle, unfolding in a California district court, accuses Arris of breaking consumer protection laws in eight US states and the District of Columbia by touting buggy modems as the "fastest and most reliable" on the market. The case centers around the Surfboard SB6190, a cable modem sold as a gigabit-speed DOCSIS 3.0 gateway. The boxes are powered by Intel's Puma 6 chipset.

Due to the now well-documented technical problems with Intel's networking chip, customers found that their SB6190 boxes suffer spikes in latency and poor performance under certain conditions, ruining online gaming and other interactive connections. The chipset cannot cope with even modest streams of small, or zero-sized, TCP or UDP packets spread over multiple IP network ports: an internal lookup table can be rapidly filled up, degrading the modem's ability to process traffic.

"Since its launch in late 2015, Arris marketed the modem as a high-end cable modem delivering 'the fastest speeds and most reliable connection to the Internet.' However, Arris failed to disclose that the modem contains a serious defect that prevents it from operating properly," the complaint, which also cites a 2016 Reg article, reads.

"News reports and customer complaints since the release of the modem indicate that it suffers from high spikes in network latency – delays in data communication over the network – that degrade users' Internet connectivity."

Now, lawyers want to collect damages from Arris on behalf of all consumers who purchased the SB6190 modems. Earlier this week the case was cleared by the intake judge and assigned to be heard by Judge Lucy Koh, who has a long history of presiding over suits involving tech companies. She famously told Apple's lawyers they were "smoking crack" when they tried to call 75 pages of witnesses in a 2012 battle with Samsung, for instance.

The Arris case is nearly identical to a complaint filed in late March with the same Northern California District Court. However, while that case only alleged violations of consumer protection laws in California, this more recent suit expands that to allege violations of state laws in Hawaii, Arizona, Oklahoma, Louisiana, Ohio, Illinois and Kansas, as well as the District of Columbia.

Arris did not respond to a request for comment. ®

Brace for cost, job cutting in the aftermath

With PIGIN skewered, take a look at this lovely TURTLEDOVE

Cloudflare dumps Google's reCAPTCHA, moves to hCaptcha as free ride ends (and something about privacy)

You want this service at Cloudflare's scale? Then maybe you might want to pay for it