'Optane on a string instead of captive in the box'

Analysis An Apeiron Optane array has five times the throughput, more than 6 times the IOPS, and up to 38 times lower latency than an Aperiron flash array.

In a technology demo Apeiron has compared the performance of its ADS1000 storage with NVMe flash drives and Intel Optane 3D XPoint drives.

Global sales and marketing exec veep Jeff Barber tells us: “We have 3rd party testing of NAND vs. Optane, with a 70/30 read/write mix, where Optane with Apeiron produces only 13 microseconds of latency vs. 500 for NAND. Large block writes are 10x NAND performance, with 25x less latency.”

Intel’s P4800X is a 375GB drive built from 3D XPoint memory which is faster than NAND and lasts longer than flash as well.

The storage is an external array accessed across a hardened layer 2 Ethernet providing RDMA access to data using NVMe over Ethernet. Accessing servers are fitted with Apeiron’s own host bus adapters (HBAs) to achieve this, and the company’s pitch is that those servers get direct-attached SSD access speed when accessing a shared external array fitted with SSDs.

The flash drives were 24 x Toshiba 7.68TB SSDs and the ADS1000 was accessed across 32 x 40 GbitE ports hooked up to five Dell and NEC x86 servers. Each server had two 2-port Apeiron HBAs installed.

Then Apeiron looked at the same servers fitted first with internal Optane drives and, secondly, accessing the ADS1000 fitted with Optane drives.

The company looked at IOPS, throughput and average latency and sent us a set of slides showing the results.

Barber said: "Essentially we had a partner (WWT) complete a full study of NAND NVMe drives through the Apeiron network. This testing consisted of four drives per server, using a combination of Dell and NEC to prove Apeiron is compatible with any x86, PCIe Gen-3 [system].

“Apeiron then worked with Intel to secure multiple Optane drives and run the same VDBench scripts, using Optane “out of the Box” (no optimisation applied-straight Apeiron driver, HBA and enclosure). … we ran 70/30 read/write with some very large block sizes (up to 256K).”

Here is a chart showing IOPS, throughput and latency for a NAND-based ADS1000 and an Optane-based one: 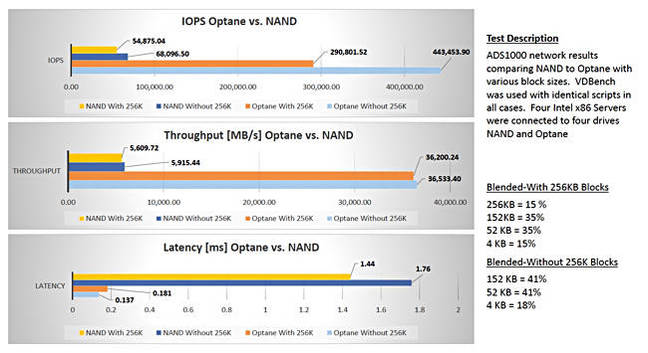 Apeiron also ran FIO benchmarks, with Barber saying: “The FIO slides are critical because they prove that the Apeiron network is not adding any discernible latency. In fact, it is typically faster than an internally installed Optane drive. This demonstrates 'Optane on a string' instead of captive in the box. It will change how we look at HPC, Analytics, SAP HANA, etc…”

There is a 4K block random read chart: 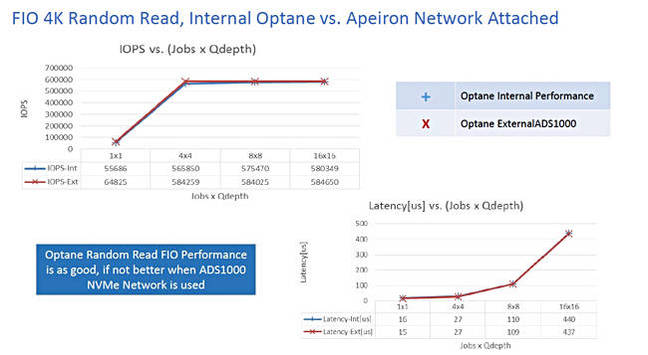 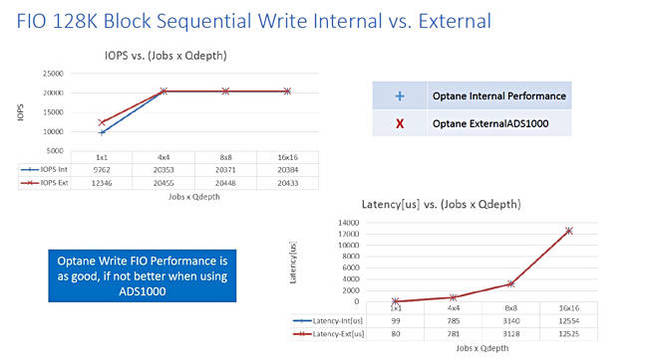 This is the first external array Optane benchmark we have seen and it's clear that RDMA over Ethernet provides access as fast as if the Optane drives were local to the accessing servers.

Apeiron's system design supports both NAND and Optane SSDs and, presumably, even faster other media if that comes along. The company's interest is to show that, like an NVMe over fabrics-accessed array, its network access penalty is low to non-existent, and that its array's performance scales linearly. Job basically done.

Ours is to compare the NAND and Optane SSD data access performance.

Such a rocket ship array product would likely blow away virtually every external block array in existence performance-wise. The company probably has a data management services roadmap to add enterprise appeal to this – potentially – hottest of hot storage box products. ®

NVMe? Well, quite. Now Intel, too, is pumping out consumer QLC SSDs