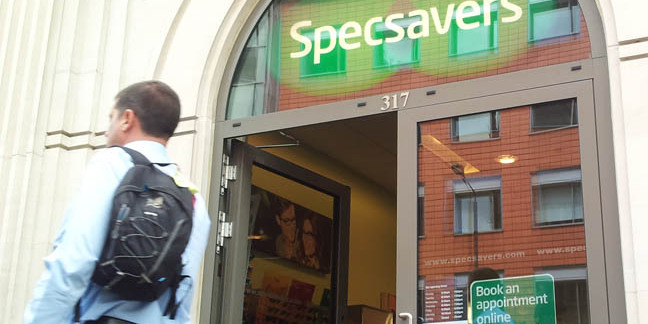 Oracle's cloud has been judged too risky, too expensive and not up to scratch by Specsavers, which is aiming to complete an AWS and Azure combo next year.

And, in another plus for Microsoft, Specsavers (the British optical retail chain) is adopting Office 365 over Google Docs, saying Microsoft is cheaper.

The move comes as the 33-year-old retailer has cut its IT infrastructure and network of 200 legacy suppliers to just 25 in a modernisation project.

Specsavers ditched a tapestry of accounts payable systems in favour of Oracle ERP – but Oracle failed to make the grade on cloud, meaning it will float on the enemy: AWS.

Global CIO Phil Pavitt, responsible for Specsavers' modernisation, told The Reg that Oracle's cloud had cost too much and was too risky a bet. "For a company that was going to have its whole back office running on [cloud], it's not mature enough for us," he said.

He was also unwilling for Specsavers to become a guinea pig for Oracle's cloud.

"Secondly, there's no huge user cases on it [Oracle cloud] like us, so why would we go first? We need industrial strength.

"Thirdly the pricing is wow! They need to work the pricing out. Cloud services are not cheap. The idea that 'cloud is cheap' is a lie."

He dinged Oracle's cloud not for its licensing, compute or storage but for the "bits you add on – that's expensive about Oracle".

"Azure and AWS are broadly similar pricing but, frankly, Oracle is a measure more – they have heard that from me a number of times and they are working on it. Oracle would like people like us, but we are not going to choose them today. Would we be willing to choose them in three to four years? That would be interesting."

It's not the first time Pavitt has hit Oracle where it hurts. In February 2016, he compared Oracle's tough approach to licence negotiation with putting a gun to the head.

Specsavers is putting all new apps on AWS and Azure, with existing apps being rewritten rather than ported. Forty per cent of the IT estate is currently non-cloud and the rest is set to float by the end of 2018. Specsavers has seven data centres globally but will retain just two for backup.

Microsoft is 'cheaper than Google'

When it comes to productivity, Specsavers is switching cloud – dumping Google Docs for Office 365. The addition of VoIP, with Skype for Business, made Office 365 cheaper. "The cost of doing Google Docs was more expensive than doing Office 365 – that was the prime driver," Pavitt said.

Office 365 has meant staff need retraining, and Pavitt said his training budget has increased 300 per cent for 2017 and 2018 – although he didn't give a figure.

"Six months ago nobody on my service desk had experience in Office 365. Today I have retrained 75 people," Pavitt said.

Elsewhere, many Specsavers coders have been retrained as designers and testers or are working as business functional analysts.

Driving this is an attempt to make IT delivery simpler and cheaper, and to let Specsavers quickly develop and spin up new digital services founded on data.

With outlets in 10 countries, Specsaver's existing IT set-up was the result of years of mergers and expansions, running regionally or in stores.

"We had started a load of projects in the past but never really got anywhere with them," Pavitt said. "The critical part of that was moving to the cloud, which will be done in 2018. The last objective was the cloud – we use digital and all those new technologies to really change the customer journey.

"For us, digital is really interesting. I don't really like the word, but for us it's about the customer journey."

Specsavers has developed a single customer record using Oracle's Customer Hub (OCH) that will be rolled out in the UK later this year and the rest of the world in 2018.

An eye to the future

The retailer will soon start pilots at three stores using IBM's Watson for pattern management data, in a step to predicting possible developments in the eye health of its customers.

The pilots will use image recognition software from Merge Healthcare that IBM bought in 2015 for £1bn, which forms part of IBM's Watson Health unit.

"If you had an eye test 30 years ago and stayed with us every two years we have your physiology – we can tell your eyes are doing this, we have 15 sets of data," Pavitt said.

The Royal Free NHS Trust was pulled up for sharing 1.6 million patient records with Google's DeepMind in May.

Specsavers told The Reg that patients' data won't be shared with IBM Watson – during the pilots at least. "All data will remain within Specsavers' secure network," a spokesperson said.

Pavitt – a former HMRC CIO and director general of change – is leaving Specsavers at the end of June, two years after joining. ®