Specs and performance deets in the wild

EPYC, the renamed Naples, is AMD's forthcoming server CPU design, to be followed by updates codenamed Rome and Milan.

The processor variants and their core/thread counts and clock details are:

The minimum is 8 cores.

Here is a slide showing costs and a SPECint benchmark comparison with a Xeon 1-socket processor. 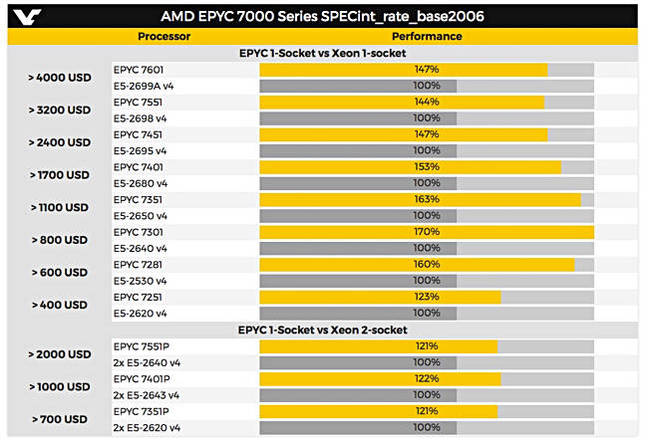 We note that Zen has 128 PCIe lanes, a lot compared to Intel, but when you make a 2-socket Zen machine, 64 lanes are used by each to talk to each other, as the architecture is built on PCIe. Both single-socket and 2-socket systems have 1x128 or 2x64 (128) PCIe lanes.

AMD slides say a single-socket system will be better than equivalent Intel Xeon because it will lower power consumption and provide up to 20 per cent lower acquisition cost. Customers can use it to right-size under-utilised servers, and optimise storage and heterogeneous compute.

AMD's basic appeal seems to be to build cheap Xeon substitutes, with Intel not quite managing to kill AMD off, and so we all avoid Intel having an absolute x86 server monopoly but still pay high x86 prices.

Can AMD struggle up from its current gnat status to be big enough to provide real competition to the Intel elephant? That seems unlikely, unless Intel makes a whole series of marketing/product missteps.

We wonder if state-encouraged Chinese technology groups, such as Tsinghua Unigroup, have cast an acquisitive eye over AMD, thinking buying it could enable them to gain some independence from Intel. Or, alternately, is China's long-term server processor technology plan to have its own server architecture and so gain even more independence?

The x86 architecture is so utterly dominant that buying AMD would seem to be more effective. Would the US government allow such a sale?

Other possible acquirers could be, at a stretch, Dell and HPE, looking to to get their own independence from Intel and bring down server CPU costs.

It does seem to us that AMD needs a relationship with a deep-pocketed organisation rather than remaining independent. ®