And now, in alphabetical order, all the storage news you may have missed

From Actian to WANdisco, we've got it all

Another week, another week of storage news laid out in our farmer’s market on groaning stalls full of free-range and organic produce. Walk around and check it out.

There is an up to 300 per cent throughput improvement and it features:

It can be extended with Actian DataConnect to other Actian data management and analytics products and to other applications on-premise or in the cloud.

It criticises Pure’s FlashArray systems for not really being tier 1 enterprise capable, identifying, for example, the lack of replication, snapshotting, unproven six ‘nines’ reliability, land a lack of file services.

The provision by Pure of replication, snapshotting and file services, amongst lots of other things makes some of Sam Grocott’s points moot, and shows Pure is aware if what it needs to provide.

Here is EMC squaring up to Pure in the tier 1 enterprise arena, and saying it has a proven advantage. True, but the size of the advantage is shrinking.

Druva inSync support for SharePoint Online is available in Summer 2017.

Hazelcast Jet is an Apache 2 licensed open source project that performs parallel execution to enable data-intensive applications to operate in near real-time. It includes event-time processing with tumbling, sliding and session windowing.

It says stream processing has overtaken batch processing as a preferred method of processing big data sets for companies that require immediate insight into data. However, the data must be partitioned – i.e. take a fragment of the stream and analyse it.

To classify data windows during processing, each data element in the stream needs to be associated with a timestamp. In Jet 0.4 this is achieved via event-time processing (a logical, data-dependent timestamp, embedded in the event itself). A drawback of event-time processing is that events may arrive out of order or late, so you can never be sure if you see all events in a given time window.

To alleviate this issue, the latest release of Jet includes windowing functionality which enables users to evaluate stream processing jobs at regular time intervals, regardless of how many incoming messages the job is processing. Jet offers three types of windows:

In a latency benchmark study Jet outperformed its competitors with a 40ms average latency for stream processing computations which remained flat as messages increased. Flink and Spark’s execution latencies were hundreds of ms rising to seconds at the higher message throughputs.

The study compares the average latencies of Hazelcast Jet, Flink and Spark Streaming under various different criteria such as message rate and window size. The full benchmark is available here.

This is the first joint system since Hedvig announced its strategic investment from Hewlett Packard Pathfinder, HPE’s venture investment and partnership program.

Through HPE Complete, customers can purchase perpetual and subscription licenses to Hedvig in addition to receiving support for the system directly from HPE and the HPE partner ecosystem.

Regarding IBM’s ending of DeepFlash 150 product sales, Eric Herzog, IBM’s VP for Product Marketing and Management and VP w-w Storage Channels, said: “We have another product that supports all flash and Spectrum Scale - the IBM Elastic Storage Server, also know was the IBM ESS. On April 11 we announced an enhanced version with a new high density JBOD for IBM ESS that increased bandwidth which shipped in May.”

“At the same time, we also made a statement of direction as part of this announcement about "new Flash Enhanced Elastic Storage Server models" without a shipment date. Those will be coming in the 2nd half of 2017.

"As you know, from an application, workload and use case perspective it is our software that matters. For the older product you had in the article yesterday and the IBM ESS that is Spectrum Scale. The current IBM ESS with all flash has Spectrum Scale giving end users all the same application, workloads, and use cases from the older product you mentioned. The current IBM Elastic Storage all flash is selling well.

“Our storage growth, per IDC, has shown it is our investment in leading edge solutions that continues to be our focus and driver.”

Intel announced its DC P4501 low-power data centre SSD at the end of May and we received some tech specs from the company. Capacities are 500GB< 1, 2 and 4TB in a 2.5-inch and M.2 firm factors. The drives use Intel 3bits/cell (TLC) 3D NAND.

We’re told the Intel-designed controller has new firmware and supports 128 queues. Intel describes its endurance carefully; Random/JEDEC up to 1 DWPD (drive write per day) or 5 PB written, sequential up to 3 DWPD or 20 PB written.

A major technical challenge for enterprise vendors is to offer customers a seamless experience between public and private clouds. Key challenges here include:

Nutanix currently has about 150 engineers working specifically on these hybrid cloud challenges with the goal of enabling a frictionless experience across public and private clouds.

Management called out VMware and Microsoft as its main competitors in the long term, as both companies have been devoting substantial resources to the development of hybrid cloud technologies (e.g., VMware on AWS, Microsoft Azure Stack).

Sheppard Robson, an architecture practice in London with round-the-world operations, has replaced an ageing storage infrastructure with a combination of Panzura and Amazon Web Services (AWS) S3 for unstructured data, and HPE-owned Nimble Storage for high-performance block data.

This eliminated the need for its traditional NetApp NAS (network-attached storage) storage model, and also enabled Sheppard Robson to remove an entire data centre being used for disaster recovery.

Simon Johns, IT director at Sheppard Robson, said; "We've been able to move all our unstructured data to Panzura and all of our VMware clones and all the structured data to Nimble Storage, enabling us to decommission all the NetApp arrays that had been handling all that data. The combination of Panzura and Nimble Storage gives a complete, advanced hybrid cloud storage solution for both file and block data. We completely removed our disaster recovery sites – a direct consequence of implementing Panzura. As a result, we've been able to shut down an entire data centre and provided collaboration between remote offices."

Both the DS1517 and DS1817 can be scaled up to a raw capacity of 150TB and 180TB respectively with two DX517 expansion units. They support Synology High Availability (SHA), providing redundancy in case of unexpected network failure or disasters, and ensuring seamless transition between clustered servers. 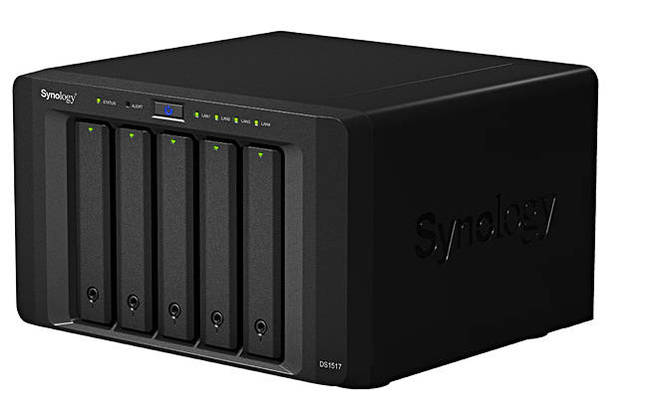 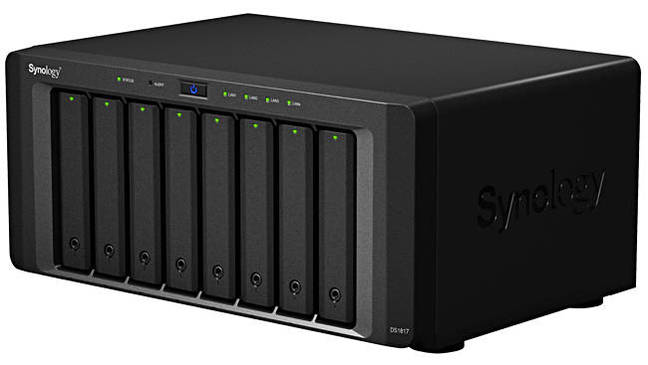 The DS1817 is powered by a quad-core 1.7GHz processor with RAM module expandable up to 8GB. Thanks to the built-in 10GbitE interfaces. It can achieve sequential throughput performance exceeding 1,577 MB/secs reading and 739 MB/secs writing when using RAID 5. Built-in 10GBASE-T ports and 1GBASE-T LAN ports pave the way for upgrade to a 10GbitE environment, and provide support of Link Aggregation and failover.

It provides storage for virtualisation environments with VMware, Citrix, and Hyper-V certificates.

Synology says these systems are for professionals and growing small/medium-sized businesses. Each can serve as a centralised data backup destination. They have a 3-year warranty, extendable to 5 years in some regions.