Still lagging WDC and Toshiba chip capacity by half

Samsung says it is boosting its 64-layer V-NAND flash chip production after Toshiba and WDC have introduced 64-layer NAND drives.

The Samsung V-NAND 3bits/cell (TLC) chips have 256Gbit capacity and are being punted at mobile, PC and server applications.

Both Toshiba and WDC recently introduced their own 64-layer 3D chip SSDs, with Toshiba’s XG5 in 256GB, 512GB and 1TB capacities in its NVMe M.2 format. This TLC chip features an SLC (1bit/cell) cache. 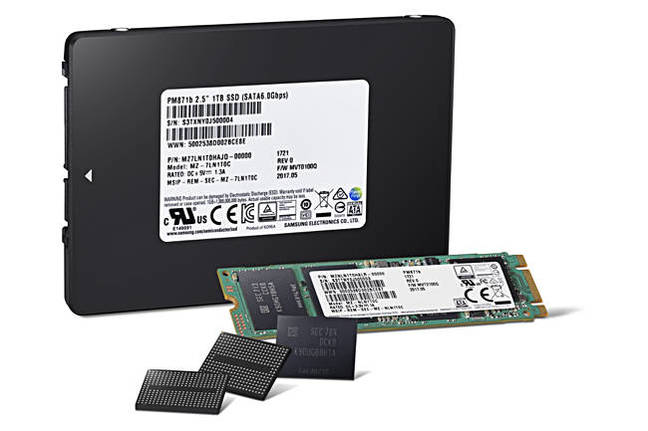 The company says more than 50 per cent of its monthly NAND flash production should be 64-layer chips by year end. It is looking forward to a terabit V-NAND era, meaning a 4x chip capacity increase. That means either an increase in layers and/or a decrease of cell size – possibly both.

Samsung says that its 256Gbit chip has about 85.3 billion cells and several billion holes penetrating "several dozen layers of cell-arrays", with technological difficulties including making these holes homogeneous in shape. Another was “properly dispersing the weight of all the layers to improve the stability of the channel holes.”

And a third was uniformly "covering the inner side of each channel hole with an atomically thin, non-conductive substance."

These difficulties will increase as additional layers are added to the chips.

Samsung is now lagging its competitors in the total chip capacity and capacity per layer area and, no doubt, has plans to catch up. ®