Elon Musk has published his blueprint for “Making Humans a Multi-Planetary Species” by establishing a self-sufficient city on Mars. 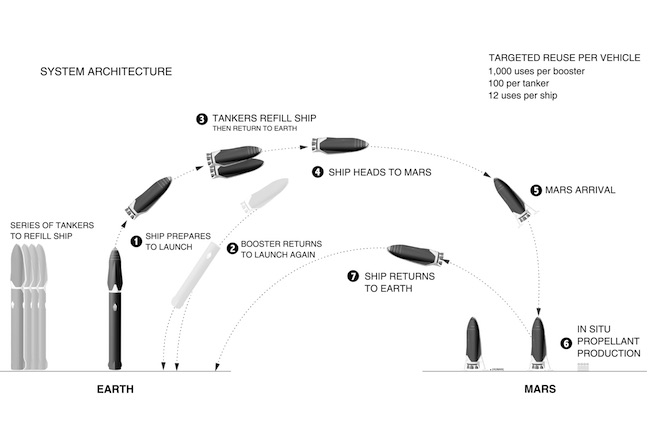 Musk reckons humanity needs to get off-planet before an extinction event comes along and that Mars is the best candidate for that effort: Venus is too nasty, Mercury too hot and the moons of Jupiter or Saturn too distant.

Which leaves the problem of getting to Mars, which needs an “interplanetary spaceship” carrying a lot of propellant. Musk's plan is to launch that ship empty, then ferry up lots of fuel on a series of tankers. Even an empty ship will need a bigger booster than humanity has ever previously devised and launched. Musk says such a rocket will be bigger than a Saturn V and have lift-off thrust of 13,033 tons.

The tankers and the Mars vehicle both need to be reusable, to keep costs down. He also thinks we need the ability to make fuel on Mars to send rockets home, otherwise we'd end up with “a massive graveyard of ships”. Return journeys for reusable rockets also keep costs down.

That means landing the rocket on Mars, too, where it will be refuelled with Methane. Musk reckons that's the idea fuel. Kerosene can't be made on Mars as we're pretty sure there's no oil up there. Hydrogen is hard to store and requires lots of energy to make, not good for a new colony. Methane's therefore Musk's preferred poison, as it can be made on Mars and is easier to handle overall.

His preferred “interplanetary spaceship” is depicted below and will include pressurised decks capable of hosting 100 people for the 80 days or more needed to reach Mars, plus 450 tons of “the luggage and all of the unpressurized cargo to build propellant plants, and to build everything from iron foundries to pizza joints to you name it” he thinks will be needed on Mars. 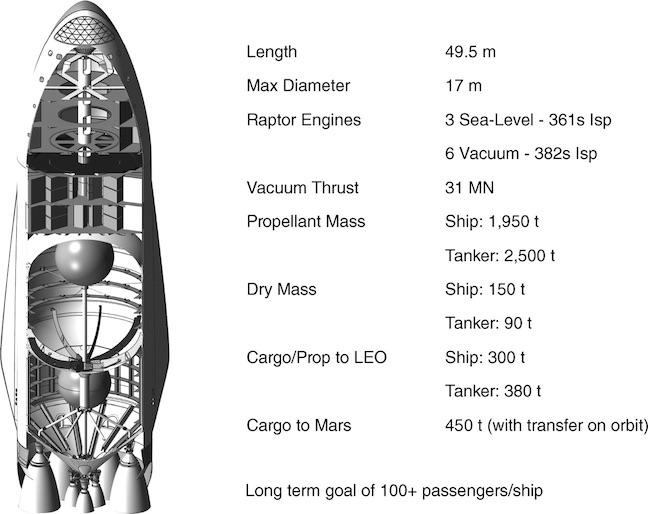 His plan calls for each Mars ship to carry about 100 people, but for multiple ships to leave in each launch window to the red planet so that we get a population of a million to Mars in decades, rather than centuries.

The document says SpaceX is already working on lots of the things needed for a Mars shot. It's already developed a version of the carbon fibre fuel tanks Musk thinks it will be needed. “Hopefully, we will be able to complete the first development spaceship in maybe about 4 years, and we will start doing suborbital flights with that,” Musk writes. “If things go super-well,” he adds, it might be possible to try for Mars “in the 10-year timeframe, but I do not want to say that is when it will occur. There is a huge amount of risk. It is going to cost a lot. There is a good chance we will not succeed, but we are going to do our best and try to make as much progress as possible.”

Between now and then, he thinks the work going into Mars tech could produce very rapid, but very expensive, freight delivery that could get to anywhere on earth in 25 minutes … after you schlep a cargo out to a launch barge. ®