Gartner confirms what we all know: AWS and Microsoft are the cloud leaders, by a fair way

Paranormal parallelogram for IaaS has Google on the same lap, IBM and Oracle trailing

Gartner has published a new magic quadrant for infrastructure-as-a-service (IaaS) that – surprising nobody – has Amazon Web Services and Microsoft alone in the leader's quadrant and a few others thought outside of the box.

Here's the Soothsaying Square in all its glory. 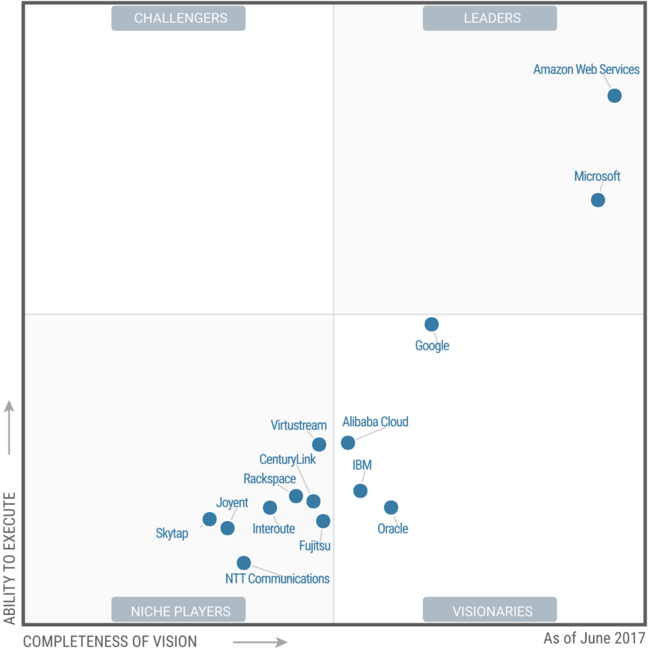 That Oracle and IBM are rated visionaries may turn heads, as both strut like cloud leaders: Oracle regularly says its cloud is superior to Amazon's. Yet Gartner rates Oracle's cloud “a bare-bones 'minimum viable product'” that offers “only the most vitally necessary cloud IaaS compute, storage and networking capabilities.” The analyst firm also worries about the Oracle cloud's “limited operational track record” and warns that “Customers need to have a very high tolerance for risk, along with strong technical acumen.”

It's not all scary: Gartner says “Oracle has a realistic perspective on its late entry into the market, and has a sensible engineering roadmap focused on building a set of core capabilities that will eventually make it attractive for targeted use cases.”

IBM was rated visionary because its cloud is a work in progress. Probably slow progress. While the company is working on a “Next-Generation Infrastructure” project that will improve scale and efficiency, there's no news of when it will debut. For now, IBM's cloud offering is mostly SoftLayer with a feature set Gartner says “has not improved significantly since the IBM acquisition in mid-2013; it is SMB-centric, hosting-oriented and missing many cloud IaaS capabilities required by midmarket and enterprise customers.”

IBM has, throughout its history in the cloud IaaS business, repeatedly encountered engineering challenges that have negatively impacted its time to market. It has discontinued a previous attempt at a new cloud IaaS offering, an OpenStack-based infrastructure that was offered via the Bluemix portal in a 2016 beta. Customers must thus absorb the risk of an uncertain roadmap. This uncertainty also impacts partners, and therefore the potential ecosystem.

Don't forget, dear readers, that IBM has pretty much bet its future on cloudy cognitive services.

Alibaba also makes the visionary quadrant, as it's ambitious and growing fast. But Gartner warns its English-language portal doesn't offer all the services available in China. On top of that, the company's not an innovator. Or as Gartner puts it, “Alibaba Cloud's vision seems inextricably tied to that of its global competitors; it takes liberal inspiration from competitors when developing service capabilities and branding.”

Google's the visionary closest to escaping into the leaders' quadrant. Gartner says it's a fine cloud for developers of cloud-native applications and is building features suited to more conventional workloads at speed. The analyst firm suggests that once Google's partner ecosystem is more mature, it'll be more attractive. For now, it's offering “deep discounts and exceptionally flexible contracts to try to win projects from customers that are currently spending significant sums of money with cloud competitors.” Which makes it a fine alternative to AWS, a role it's often filling.

On Azure, Gartner is impressed that Microsoft's moved beyond building a vanilla IaaS to innovating with its own features and praises its useful role for companies committed to Microsoft. But the cautions it offers are a bit scary.

While Microsoft Azure is an enterprise-ready platform, Gartner clients report that the service experience feels less enterprise-ready than they expected, given Microsoft's long history as an enterprise vendor. Customers cite issues with technical support, documentation, training and breadth of the ISV partner ecosystem.

Microsoft is actively addressing these issues and has made significant improvements over the last year. However, the disorganized and inexperienced ecosystem of managed and professional service partners makes it challenging for customers to obtain expertise and mitigate risks, resulting in greater reluctance to deploy production applications or conduct data center migrations.

Azure Fast Start implementations by Microsoft professional services are inconsistent in quality, and do not always accurately reflect what a customer will need to deploy production applications in Azure.

The second caution warns that security and DevOps features may not be sufficiently mature to satisfy customers, while “Multiple generations of solutions, coupled with unclear guidance on when to use each, create significant complexity in determining the right implementation.”

AWS is rated “the most mature, enterprise-ready provider, with the deepest capabilities for governing a large number of users and resources.” Gartner says it can satisfy the cool kids who want cloud-native and old hands who want to shift traditional workloads to the cloud, in part because independent software vendors have clambered aboard in large numbers.

But the analyst firm warns that AWS “has just begun to adapt to the emergence of meaningful competitors”, continues to offer complex pricing that makes third-party cost-management tools highly desirable and doesn't offer SLAs on most services.

It also plays hard: Gartner says “Its disciplined approach to contract negotiation and discounts is based almost solely on customer spending and near-term revenue opportunity.”

There's a flock of challengers on the quadrant too, namely CenturyLink, Joyent, Virtustream, Interoute, Skytap, NTT, Rackspace and Fujitsu. But this article's already long enough, so if you want to read them perhaps you'll go get the whole Supernatural Square for yourself: AWS has a free data-for-download link here and Microsoft's done the same here.

As you read it, ponder the omissions, too. OVH hasn't made Gartner's list. Nor has Digital Ocean. The likes of Salesforce, SAP and ServiceNow, which will happily rent you servers by the hour, fall outside Gartner's definition of IaaS, falling into PaaS territory and therefore a different paranormal parallelogram. ®