Somewhere in there is the germ of a good idea 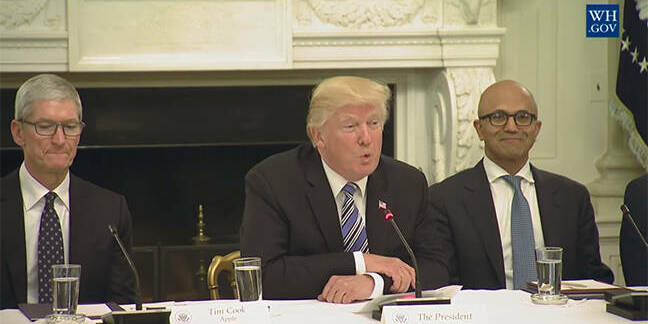 Monday afternoon saw the first meeting of the "American Technology Council" at the White House, during which most of the country's top tech CEOs gathered around to talk about what could be done to modernize the US government's abysmal IT systems.

Much of the coverage has focused on the personality of president Donald Trump and the uneasy position of the tech CEOs – most of whom dislike Trump passionately – but the bigger question is: what happened? And what did people get out of it?

"Our goal is to lead a sweeping transformation of the federal government's technology that will deliver dramatically better services for citizens, stronger protection from cyber attacks..." said Trump in intro remarks. "We're embracing big change, bold thinking and outsider perspectives to transform government and make it the way it should be and at far less cost."

As many and varied as Trump's flaws are, his willingness to shake up federal institutions while focused on money is unquestionable and may be in citizens' interests this time. And of course in the interests of the tech companies that can expect to be huge recipients of US government money for their technology if Trump comes good on his rhetoric.

Earlier, Trump's advisor and son-in-law Jared Kushner spoke about how outdated the federal IT program is: federal agencies maintain over 6,000 data centers; they run on ancient technology (the Pentagon still uses floppy discs for some of its nuclear weapons systems); and records are often such a mess that it is not possible to provide an electronic version of them.

This narrative was repeated by politicians in advance of the meeting. Gerry Connolly (D-VA) complained about the "crazy quilt system of management" in the federal government with "no clear lines of authority, accountability, responsibility."

Will Hurd (R-TX), who sponsored a bill aimed at modernizing technology in the federal government, talked about a leadership deficit: "We have to make sure we have people in the agencies that recognize the need for modernization, and it starts with the head of the agency."

It is a reality that has long been known and complained about, but which the endless competing federal agencies seem incapable of addressing. In the way that only government agencies seem capable of achieving, much of the IT budget is spent on supporting old and outdated technology rather than introducing new, modern systems.

Trump could be just what the system needs – someone who refuses to listen to anyone and plows ahead with his own idea of what has to be done. Which in this case – unlike broader diplomatic efforts – may well be what's best. The big tech companies can smell the dollar bills and so spent their short time addressing the president personally to tell him that their technology was the solution to his concerns.

Microsoft's Satya Nadella kicked things off by stressing how important it is to modernize technology. He said getting the right job skills was essential, and, good to his word, he talked about why immigration policies are important to the US economy (this in response to Trump's anti-immigration stance and efforts to clamp down on the use of H-1B visas used by most tech companies to bring in overseas workers).

Trump rewarded Nadella for his implicit criticism by suggesting that everyone else around the table keep things shorter.

Amazon's Jeff Bezos stressed how using commercial technology wherever possible is the key (tech like what Amazon owns, perhaps) and talked about how it's impossible to overstate the importance of artificial intelligence.

And so on – each CEO pushing their particular angle in the hope of impressing on the president that their company had the goods to make his dream come true. Trump alpha-maled his way around the table.

And then he hit Oracle co-CEO Safra Catz, who we have repeatedly noted has been carrying out a nauseating campaign of heaping praise on Trump and everyone who is pushing his policy positions. The official pool report felt obligated to flag the brown-nosing, noting in its concise summary: "Safra Catz of Oracle was particularly effusive, thanking the president for an absolutely wonderful day working together."

Having gotten all the way around, Apple's Tim Cook was last and pushed his line about thinking about citizens as "customers" of the government. And he reiterated Nadella's point about necessary skills and training and argued that kids should be taught coding in school.

That was the public part of events. All we know about the rest of the day is that the large group had broken up into different smaller groups and discussed issues such as big data and analytics, government and private sector partnerships and visas for high-skilled workers.

In short, despite their disdain for Trump personally, the tech CEOs know a business opportunity when they see one.

Pictures of the event have shown Trump bloviating while the tech CEOs look like they'd rather be just about anywhere else in the world at that moment. But Trump is still just one guy – albeit the one with his hand on the tiller of the federal government's tanker.

Trump couldn't help himself, of course. "We have approximately $3.5 trillion dollars of market value in this room," he noted, before making it clear he was more important: "But that is almost the exact number we have created since my election. In fact, I think we have you beat by a little bit, which is a pretty good number. But I congratulate you all on an amazing job." ®

Burning through the Amazon billions with rockets