NASA’s Kepler space telescope has finished cataloging possible planets in the direction of the Cygnus constellation.

At a news conference today, NASA astrobuffs announced that the telescope has identified 219 new planet candidates. Ten are about the size of the Earth and are in the “Goldilocks zone” – they’re at the magic distance from their suns so that liquid water would theoretically be able to exist (and maybe life, if we’re really, really lucky).

A quick history lesson: Kepler first started planet-hunting in the direction of the Cygnus constellation in 2009. It searches for characteristic light signatures that appear when a planet moves across a sun’s face (typically its own sun).

The new findings bring the total number of candidate (not confirmed) planets to 4,034. About 50 are around the size of the Earth and would be in the Goldilocks zone, up from about 40 previously. Numbers are fuzzy because NASA hasn’t yet clearly defined the boundaries of what “habitable zone” and “terrestrial-sized planet” are.

Although there’s still much more work to be done before scientists can say for sure how many habitable planets there really are outside our solar system, the catalog is “really kind of the final statement” about what the Kepler telescope had to say, Emily Rauscher, an astrophysicist at the University of Michigan in Ann Arbor, who was not involved in the mission but studies exoplanets, told The Register.

The next step for scientists is to do the hard analysis of the catalog, Rauscher says. In an independent study, researchers from the California Institute of Technology have already begun crunching the numbers.

A paper accepted by The Astronomical Journal (here's the arXiv version) shows that almost all exoplanets discovered by NASA’s Kepler spacecraft fall into two planet types: super-Earths and mini-Neptunes. 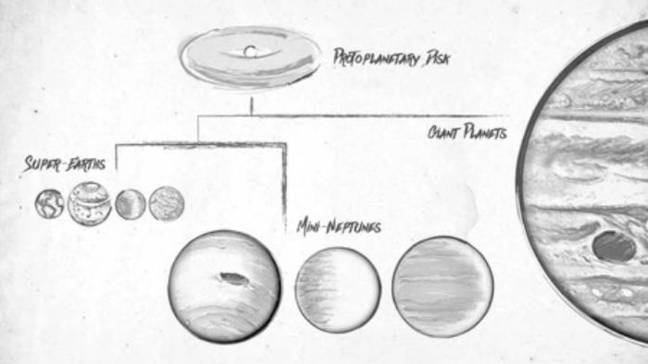 “This is a major new division in the family tree of planets, analogous to discovering that mammals and lizards are distinct branches on the tree of life,” said Andrew Howard, co-author of the paper and professor of astronomy at Caltech.

“NASA’s Kepler Mission is most effective at discovering planets that orbit their stars frequently,” he explained to The Register. Only exoplanets with orbital periods less than a hundred days were considered, and about 32 per cent of the planets were super-Earths with radii between 1 and 1.8 times larger than Earth, and 41 per cent were mini-Neptunes with radii between 1.8 and 3.5 Earth radii.

Although these types of intermediate planets are common throughout space, there are none in our solar system, the paper notes. Gas giants like Saturn and Jupiter are rare. It is estimated that only 1 per cent of stars host super-Jupiters, planets that are more massive than Jupiter with short orbital periods of about 10 days.

It shows that the Milky Way has a strong preference for small, rocky planets like Earth or gassy ice planets like Neptune.

The two groups give researchers another way of estimating which exoplanets may have solid, rocky surfaces, and others that may have surfaces buried beneath thick atmospheres.

“This distinction is important to determine which planets are potentially habitable, and those that are inhospitable to life as we know it,” Benjamin Fulton, first author of the paper and graduate student at Caltech and the University of Hawaii, told The Register.