The Tracker divides the converged systems market into four segments, and combines two of them in its published figures;

The overall stats for the three market segments the firm publicises are as follows:

Another quarter of HCI growth at the same rate would see $1.1 Bn in revenues while Integrated Infrastructure & Certified Reference Systems, declining again at 3.3 per cent would see $1.33 Bn, with HCI overtaking in the third quarter if growth rates stayed the same.

The top vendors in the Integrated Infrastructure & Certified Reference Systems area were;

Cisco and NetApp's Flexpods were the only growth product in this segment of the market, with HPE being the largest share loser in this combined segment. Dell also gained market share, by declining less than the market overall.

Here are the Integrated Platform numbers for the top vendors;

In this segment all vendors' revenues declined y-on-y, with Oracle and HPE gaining share in a declining market.

Annoyingly IDC doesn't break down the hyper-converged numbers into supplier shares in its published info. So we don't know if Dell (EMC) has overtaken Nutanix or not, or how well or badly any supplier has done.

IDC does publish a chart showing the segment changes over the past few quarters; 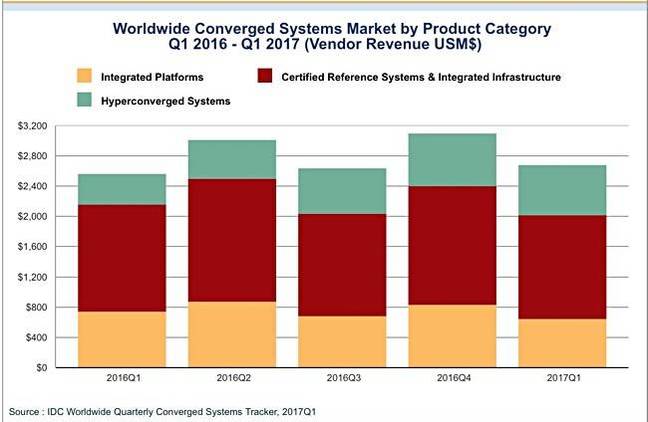 The data for converged systems in all their forms comes against a background of Q4 2016's sales dip and poor sales of standalone servers. ®