Huge ransomware outbreak spreads in Ukraine and beyond

Updated A huge ‪ransomware‬ outbreak has hit major banks, utilities and telcos in Ukraine as well as victims in other countries.

Check out our full analysis of the software nasty, here.

Early analysis of the attack points towards a variant of the known Petya ransomware, a strain of malware that encrypts the filesystem tables and hijacks the Master Boot Record to ensure it starts before the operating system on infected Windows PCs. Early reports suggest the malware is spreading using by network shares and email but this remains unconfirmed. The outbreak is centred but not confined to the Ukraine. Victims in Spain, France and Russia have also been reported.

Victims include Ukrainian power distribution outfit Ukrenergo, which said the problem is confined to its computer network and is not affecting its power supply operations, Reuters reports. Other victims include Oschadbank, one of Ukraine's largest state-owned lenders.

Global shipping outfit Maersk Group is also under the cosh.

Hackers behind the attack are demanding $300 (payable in Bitcoin) to unlock each computer. It's easy to ascribe any computing problem in Ukraine to Russia because of the ongoing conflict between the two countries, but the culprits behind the latest attack are just as likely to be cybercriminals as state-sponsored saboteurs, judging by the evidence that's emerged this far.

"While ransomware can be (and has been) used to cover other attacks, I think it's wise to consider Ukraine attack cybercriminal for now," said Martijn Grooten, editor of Virus Bulletin and occasional security researcher. ®

Updated at 1500 UTC to add: Allan Liska, intelligence architect at Recorded Future, said the attack has multiple components including an attack to steal login credentials as well as trash compromised computers.

"This appears to be a multi-pronged attack that started with a phishing campaign targeting infrastructure in the Ukraine," Liska said. "The payload of the phishing attack is twofold: an updated version of the Petya ransomware (older version of Petya are well-known for their viciousness, rather than encrypt select files Petya overwrote the master boot record on the victim machine, making it completely inoperable)."

There is some speculation that, like WannaCrypt, this attack is being spread using the EternalBlue exploit, which would explain why it is spreading so quickly (having reached targets in Spain and France in addition to the Ukraine). "Our threat intelligence also indicated that we are now starting to see US victims of this attack," according to Liska.

There are also reports that the payload includes a variant of Loki Bot in addition to the ransomware. Loki Bot is a banking Trojan that extracts usernames and passwords from compromised computers. This means this attack not only could make the victim's machine inoperable, it could steal valuable information that an attacker can take advantage of during the confusion, according to Recorded Future.

Updated at 1509 UTC to add: Reg sources from inside London firms have been notifying us that they’ve been infected. We were sent this screenshot (cropped to protect the innocent) just minutes ago: 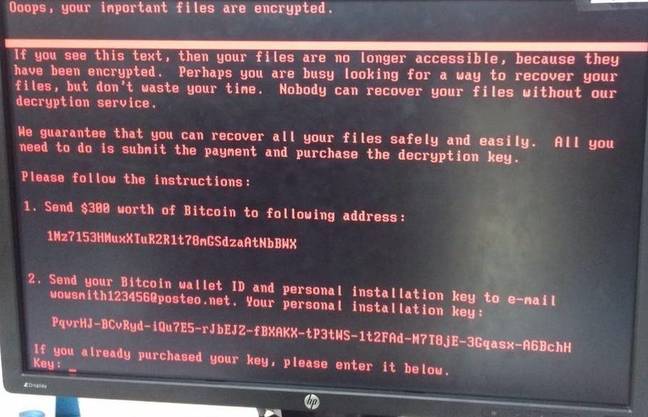