No Bull... no flops... or should that be the other way round?

The Atomic Weapons Establishment, which provides warheads for the UK's nuclear weapons, is to use a Bull supercomputer to simulate Trident nuclear warhead explosions.

Warhead components change over time through ageing, obsolescence and redesign, which affects their operational efficiency. The AWE can't run test explosions any more -The UK is a signatory to the Comprehensive Nuclear Test Ban Treaty which bans emission of nuclear yield (radioactive debris). Instead, AWE simulates atomic explosions with digital modelling and needs supercomputing facilities to do so.

It has awarded a contract to Atos for the supply of a 4.3Pflop Bull Sequana X1000 system with a Seagate Lustre storage appliance and Mellanox EDR InfniBand interconnct.

The Sequana system employs liquid cooling to counter heat build-up. It uses Xeon and Xeon Phi processors but has an open architecture, and other processor and accelerator architectures can be used, such as ARM. It is organised into cells which integrate compute nodes, interconnect switches, redundant power supply units, redundant liquid cooling heat exchangers, distributed management and diskless support.

A cell has two cabinets containing compute nodes and a central cabinet housing the interconnect switches. Each compute cab has 48 horizontal compute blades with power modules at the top of the box and cooling ones at the bottom.

Bull says each cell can contain up to 96 compute blades, i.e. up to 288 compute nodes with three nodes/blades, equipped either with conventional processors like Xeons or accelerators like Xeon Phi or NVIDIA GPUs. The Xeon compute nodes can be 2 Broadwell or Skylake SP CPUs. 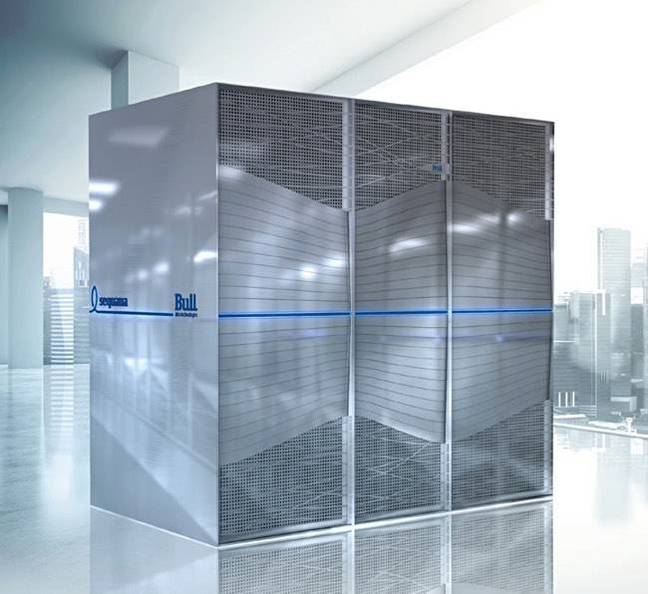 The switch cabs can use Bull's own BXI interconnect or Mellanox EDR InfiniBand.

AWE's Andy Herdman, head of its High Performance Computing unit, provided a canned quote: "We’re confident that with the purchase and eventual installation of the new Bull Sequana system it will enable us to quickly advance research and development so that we can continue to underwrite the safety and effectiveness of the Trident nuclear warhead in the Comprehensive Nuclear Test Ban Treaty era.”

How much the Britain's warheads guardian is spending on this Bull Sequana box set isn't revealed, but it is probably a large enough sum to generate financial shock and awe on its own. ®