Paula Long startup fails to reach escape velocity on its own

Exclusive Ninety-two million dollars and a pivot or two later, virtualised data guardian DataGravity has been acquired, The Register can reveal.

Not all employees were retained but the company – snapped up around June 30 – is still operational and will be making marketing moves to announce its new status in a week or two, according to CTO David Siles.

A source told us DataGravity appeared to close down on June 15, with an internal shutdown warning on June 7. There were many layoffs in the weeks leading up to this, and attempts to sell DataGravity, with its US-based engineering team, possibly to Veeam and Zerto, but they were unsuccessful. Attempts to raise more money failed.

Our source said John Joseph, one of the founders, left in March and it was confirmed by Siles that he had stepped down as president but was still on the board.

The company's COBRA group health plan has been closed down (note the date on the letter image below): 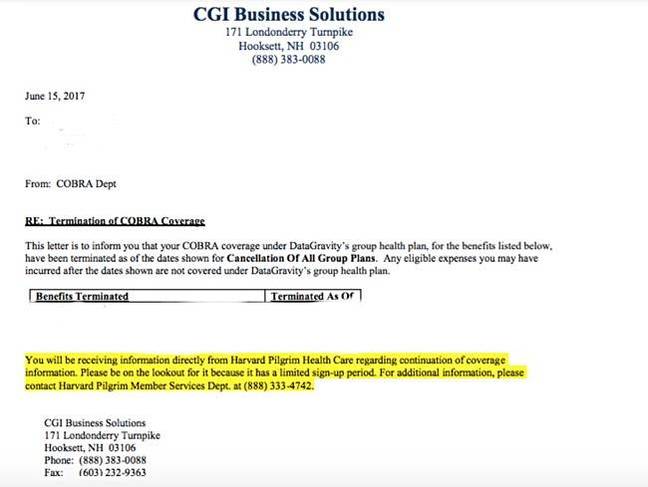 We called Siles on July 2 asking if DataGravity had closed down and he said: "You indeed have bad information about DataGravity, we did not shut down, much more exciting than that actually." A call was scheduled after the July 4th holiday.

LinkedIn shows many people have recently left, including the CFO:

DataGravity was founded by Paula Long and John Joseph in 2012 and took in its $92m in three funding rounds: $12m in 2012, $30m in 2013 and $50m in 2014. Generally we might have hoped for an IPO around now if things had been going well or a fourth funding round if more development was needed.

Paula Long previously and famously co-founded iSCSI storage array supplier EqualLogic in 2001 and it was bought for $1.4bn by Dell in November 2007.

DataGravity was started up to build storage that was aware of the data it stored and monitored things like file creation, keyword content, document changes and accesses, to provide intelligent data protection and collaboration features. It was one of the first new wave data management startups collecting and using unstructured file metadata, and launched its Discovery array in 2014, at which time it received its $50 million C-round of funding.

There were layoffs in February and March 2016 as costs were cut, and some senior excs left in August that year.

In January this year DataGravity stopped selling its Discovery Array and shipped its Discovery software as a virtual appliance instead.

May saw DataGravity for Availability, supporting Veeam Backup and monitoring data exposure and security threats in a Veeam backup repository. It looks at user and file behaviour, identifying and stopping attacks against data such as ransomware, and provides, it said, forensics-level recovery based on a full audit trail of all the changes that occurred within and across backups and by whom.

Now it has, according to Siles, been acquired by a company whose name he can't divulge and for an amount he can't reveal. During the process; "We tried to accommodate as many people as possible [but] not everyone was retained."

The 4th of July weekend interrupted the post-acquisition work of informing channel and other business partners and that is taking place now. He stressed DataGravity is operational and marketing to the public will start in a week or two.

As is customary in such events, Siles said: "We're all very excited, along with our new colleagues."

It seems likely that DataGravity has been rescued/acquired by a larger storage or data management company lacking its app-aware data access and security features.

Candidates could be Dell, HDS, HPE, and NetApp. A distant alternative is a private-equity-owned supplier or a (very) well-funded startup.

We think it likely that DataGravity may be run as a wholly owned subsidiary of its acquirer but, obviously, will have to wait and see what is revealed later this month. ®