Saying heck no to rules, man

Analysis Tegile has announced the first mainstream multi-tiered flash array in the storage industry. What does it do and how does it do it?

The updated IntelliFlash HD can have a tier of fast access NVMe flash and a separate tier of SAS SSD flash which is slower to access and less expensive. All-SAS configurations are still available by the way.

How does their performance compare?

Tegile's IntelliFlash HD was originally announced in August 2015 as an OEM'd InfiniFlash JBOF (Just a Bunch of Flash drives) from the then-independent SanDisk, which was a Tegile investor. WD then bought SanDisk.

Back then the IntelliFlash OS supported snapshots, clones, thin provisioning, inline deduplication and compression. It had VMware integration via SRM, VAAI, VASA, and VVOLs and provided unified block (FC, iSCSI) and file (NFS, CIFS/SMB3) access. The product could replicate data to Tegile's then-hybrid arrays. Tegile now has a line of all-flash arrays as well.

The updated IntelliFlash HD system has two components: a 2U base chassis controller and one or two 4U expansion capacity enclosures. These contain up to 72 SAS SSDs each. The base chassis has 24 drives: all SAS SSDs or four NVMe drives and 20 SAS SSDs.

Tegile says the flash media is dual-ported and encryption is supported.

The HD2080s have twice the capacity of the equivalent physical size 2040 product.

Multi-tiering is managed by IntelliFlash OS v3.7 software, which offers:

As before, the OS provides block (FC, iSCSI) and file (NFS, CIFS/SMB3) access that can be run concurrently. This OS runs all of Tegile's arrays, the all-flash and hybrid flash/disk ones as well as the IntelliFlash HD. 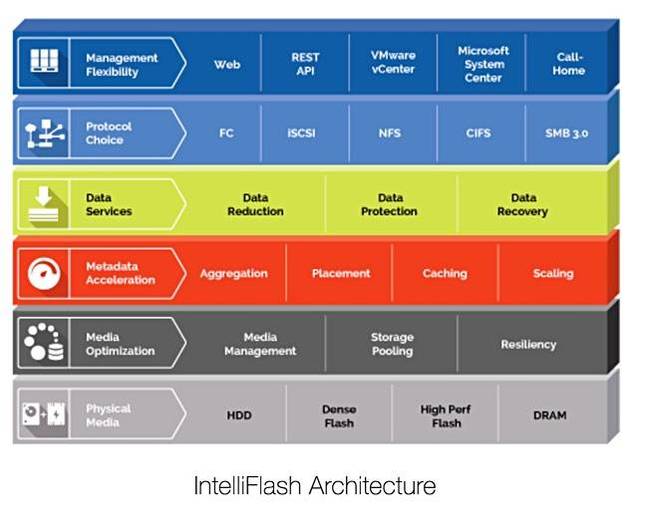 Tegile says it is the only storage provider that combines multiple types of storage media into a single volume.

It has data placement capabilities for the hybrid flash/disk IntelliFlash arrays, which place data on the appropriate fast flash or slow disk tier in realtime. That means the data placement code can handle fast and slow flash tiers as well with suitable tweaking.

Tegile says: "IntelliFlash understands the inherent characteristics of different storage media and intelligently manages the placement of data to deliver memory-like performance (speed and latency) with the best possible economics."

Tegile says the IntelliFlash HD "is the only platform that delivers the performance and economics your organization needs to run an all-flash data centre" because it provides both fast-access and (slower) high-capacity flash in one system. Think SQL databases and analytics if you will.

It claims that "with IntelliFlash HD, you can consolidate all your workloads and all of your data onto a single array to achieve the best balance of performance and economics at scale."

That rather depends on the amount of performance tier flash available and applications tolerance for scale-out architectures. For example, a 20PB SQL database, to envisage a corner case, would fit in the slower SAS tier of a single IntelliFlash HD but not in the smaller NVMe tier.

Talking about IntelliFlash HD with a single flash tier, Rob Commins, Tegile's VP for marketing, said: "My favorite use case is United Center. They use it for [an] athlete statistics database hooked to video library. They produce video during basketball and hockey games based on player performance."

There are no dual-tier IntelliFlash case studies yet.

We think Tegile's data centre workload consolidation onto IntelliFlash HD story could be true for smaller data centre shops with relatively simple polarised and bifurcated workloads. Large shops with more varied environments may find stuffing everything on an IntelliFlash system a bit of a stretch.

With 5:1 data reduction Tegile says the effective capacity of IntelliFlash HD is up to 3PB per 6U chassis and 5PB in 10U. That suggests 2PB from one 4U chassis and 1PB from the 2U enclosure.

We would suggest that, with incoming QLC (Quad-Level Cell or 4bits/cell) flash in the capacity tier, that could rise to a possible 4PB in one 4U chassis, 9PB from a 10U set of three chassis, and 27PB from a rack of three IntelliFlash systems. IntelliFlash is both a scale-up and scale-out system.

We can also expect Tegile's all-flash arrays to get an NVMe drive makeover and then adopt NVMe over Fabrics as well.

More NVMe drives are coming. Commins told us: "Later this year we will transition to a configuration of all-NVMe base chassis plus SAS Expansion shelves with the same drive capacities."

That may depend upon a controller CPU upgrade to Skylake technology to handle the increased IO load. It will enable much larger tier-1 application data sets to reside in the fast NVMe flash tier; up to 184TB from the current 31TB maximum in the IntelliFlash HD-2080-1400.

Pure Storage has separated its performance data and unstructured data all-flash array systems with FlashArray and FlashBlade. Tegile is combining them with IntelliFlash HD (NVMe+SAS) while still having performance-focussed IntelliFlash and capacity-focussed all-SAS IntelliFlash HD.

Once the full NVMe base chassis IntelliFlash HD arrives then a comparison with Pure's FlashBlade will become more interesting. ®

From me 2U: Quantum has finally joined the NVMe fabric array party

Hello everyone. We brought dip

Sorry if this seems latency obvious, but... you can always scale out your storage with end-to-end NVMe