Geminga! Yet another of astronomy's classic pranks...

A new study suggests a dangerous, young neutron star could be attracting planet-forming matter around it as it swims through space.

The first planets around pulsars were discovered in the early '90s. Astronomers aren't quite sure how planets can form around them because their environments are so inhospitable.

Geminga, a neutron star which lies about 800 light years away from Earth in the constellation of Gemini, is somewhere around less than a million years old today. It is not a particularly hospitable star: it emits gamma rays and its wind is a vicious mix of matter and antimatter that can collide and annihilate nearby bystander matter.

This study, which appeared in Monthly Notices of the Royal Astronomical Society Letters, is one possible explanation for how planets can form around some neutron stars.

"The process of discovery sometimes stalls and then leaps ahead," says University of Cardiff astronomer Jane Greaves, who worked on the study.

In the late '90s, Greaves was studying relatively cool materials – in the range of 20 to 50 on the Kelvin scale – from which stars are formed. She collected sub-millimetre, long infrared wavelength photometric data from the James Maxwell Telescope in Hawaii in 1999 – but ignored the unrelated data on Geminga until about four years ago, in 2013.

"I realised this was the one to look at," she says. 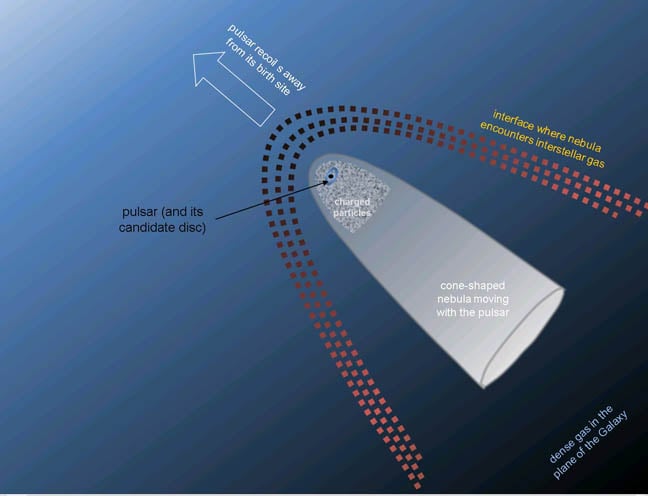 This is a sketch of the nebula formed by a wind of electrons and positrons coming from the pulsar, and the interaction with interstellar gas. Geminga crossed the plane of the Galaxy (off to the bottom right) around 100,000 years ago. It is thought that the supernova explosion was not symmetric, causing the remnant to recoil at around 200 km per second from its birth location. Credit: Jane Greaves / University of Cardiff

Based on the data, you can see an arc of about 1mm-size matter forming around Geminga. It sweeps the matter up, a bit like a cruiseship creating a bow wave as it glides through water. 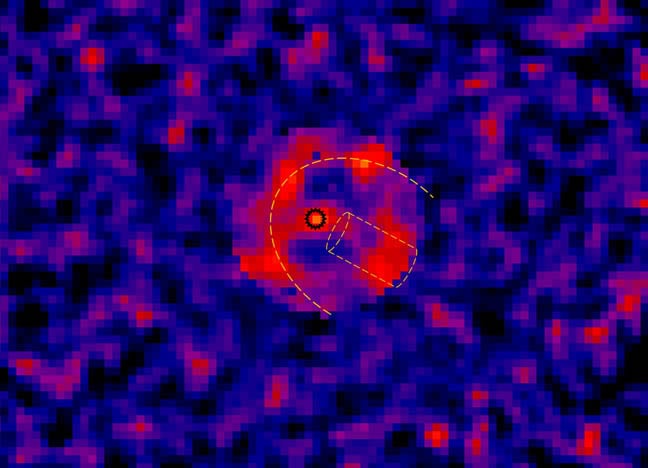 Data at wavelength of 0.45mm, combined from SCUBA and SCUBA-2, in a false-colour image. The Geminga pulsar (inside the black circle) is moving towards the upper left, and the orange dashed arc and cylinder show the "bow-wave" and a "wake". The region shown is 1.3 light-years across; the bow-wave probably stretches further behind Geminga, but SCUBA imaged only the 0.4 light-years in the centre. Credit: Jane Greaves / JCMT / EAO

The team right now has basically no clue how close the arc is; Greaves says it could be anywhere in the wide range from close-but-not-quite-touching the neutron star's surface to 1,000 times the distance from the Earth to the Sun. So, maybe pretty far away.

But based on the material's brightness at .45 mm and .85 mm wavelengths, she says the material seems to resemble the planet-building-blocks of carbon and silicon. Other work has also indicated that this is the correct size for planets to someday form.

Alex Wolszczan, an astronomer at Penn State University in University Park in the United States who was not involved in the study but studies radio pulsars, writes in an email that: "This detection, if confirmed, is interesting, because it adds to the very modest evidence that disks can form around neutron stars, and that they can be massive enough to make planets similar to those around 1257+12." (1257+12 is one discovered pulsar with planets around it).

"It supports the idea that future searches for neutron star planets should concentrate on low-mass, compact orbits systems," he added, because the two pulsar disks scientists have found so far are both low-mass and compact.

Or maybe it's just simply something weird going on in the background.

One reason why this could be happening, speculated Greaves, is that perhaps the neutron star is moving slowly enough for the matter to sneak through its matter and antimatter wind.

"It's a fairly preliminary result," Phil Armitage, an astronomer at the University of Colorado in Boulder in the United States, who was not involved in the research but studies how planets outside our solar system are formed, told The Register. "How do you keep that reservoir [of matter] in the environment?" he wondered.

"Consider that likely those particles have different chemical composition," Niccolò Bucciantini, another third party scientist, an astronomer at the University of Florence in Italy, added by email. It's entirely possible the material isn't the right stuff for planet formation, which "is more than just accumulating dust".

In the future, the team hopes to narrow down the uncertainty of how close this mysterious disk is to Geminga to maybe 50 times the Earth-Sun distance instead of 1,000, perhaps using the ALMA telescope in northern Chile. They're also curious about its shape and speculate it could be a giant spiral of gas and matter.

Greaves agrees that for now, the research is still in its early stages and there's more work to do for confirmation. "It looks very promising," she says. ®