Pictures Autonomous cars, what's not to like? According to their proponents, they will herald an accident, traffic and generally hassle-free age of transportation.

So much so, in fact, that Bosch – the world's largest supplier of automotive parts – has decided to "evolve into a provider of services for road users".

The company used its biennial press junket – this time branded the Bosch Mobility Experience and held in Boxberg, Germany – to promote its gear change (geddit?).

Now, it seems, it's all about selling a lifestyle. "My home, my workplace, my car," reads the blurb. "Connectivity is turning cars into a third living space."

And sitting in their swanky demo car, using a touchscreen to control the shutters on "your house" and check the contents of "your fridge" definitely feels – let's be honest – pretty damn cool.

But the creep of connectivity from home to car does have a tangible whiff of dystopian fiction, while there's an eeriness to the way people have easily bought into the "zero accidents" mantra. Certainly those at the expo seemed to have sipped the Kool-Aid. 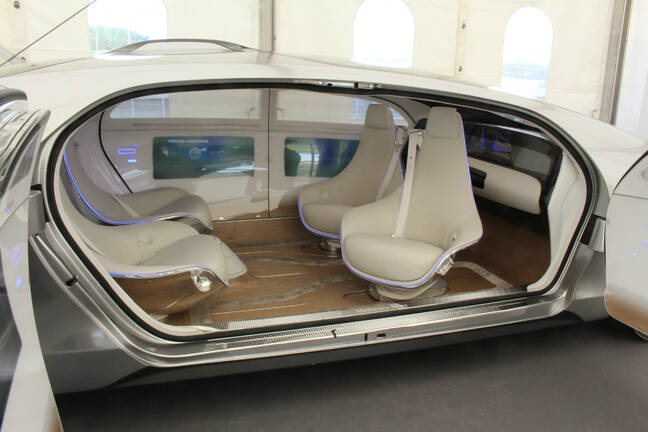 Inside the Bosch-Mercedez-Benz "vision" of a fully driverless car. Do those seats look safe?

"Well, when we have autonomous cars, there won't be any accidents," one Bosch employee said when The Reg asked about the safety implications of car seats that can spin round and face any direction.

Sure, but what about the loon who slams into you when they're taking their vintage 2002 Renault Clio out for a spin?

Slurping up your data

And then there's all the data you're merrily sending off to the cloud.

"A self-driving car generates huge quantities of data – as much as one gigabyte a second," Dirk Hoheisel told the journos amassed in the Bosch auditorium.

This raises both practical and ethical questions.

On a practical level, the companies running the cars need decide what data to ditch and what to keep – connected cars store information on everything from speed and road surfaces to travel locations and users' personal details. 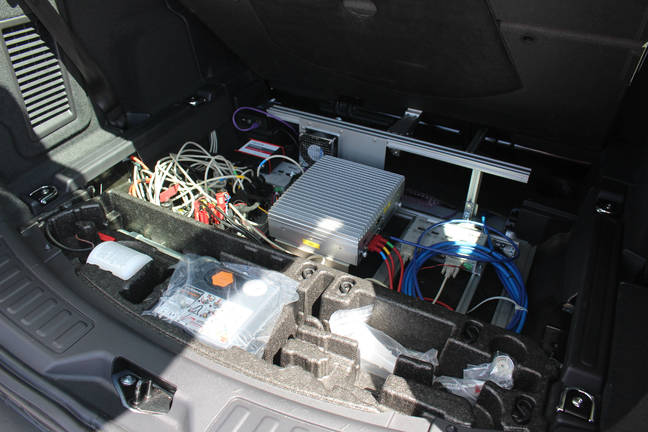 Inside the trunk of an autonomous vehicle

In the R&D stages, raw data generated by the car's many sensors is gathered, encrypted and sent back to Bosch's labs via the cloud. It's used to make tweaks to the car's systems, but the techies are also using it to define what cars "in the wild" will need to send back to base.

When they're on the road for real – as some already are – much less data will be collected (it's also sent as CAN, not raw, data to cut down on storage). Should the team decide they're not getting enough on a particular measure, they can change what the car is recording remotely (we were assured this wouldn't happen when the cars were owned by regular Joes.)

Ethically, the implications of such a massive amount of data being pumped back to Bosch and its partners could be huge.

For a start, people might prefer that information remains a mystery to The Man – after all, no one wants their visits to their local sex shop fed into targeted advertising algorithms, or their carpark dings bumping up insurance premiums.

However, some of it is useful. For a start the car needs it to work – but it can also feed back information on traffic flows, help generate high-definition maps and identify responsibility in crashes.

As the EU-funded project on connected cars Flourish – a collaboration between law firms, academics and charities – reported this week, there is a balance to be struck.

"If a user opts out of sharing geolocation data, this will undermine certain safety features such as preventing speeding in speed-limited areas, and will undermine traffic congestion information required to assist traffic management," their insurance and legal report said (PDF).

In a statement of the somewhat bleedin' obvious, Rolf Bulander, chairman of business sector mobility solutions at Bosch, said: "There's an intensive debate on data in vehicles."

Responding to a question posed by The Reg, Bulander said companies will be bound by data protection legislation, but some of this will depend on how data is classified.

Non-sensitive data, like traffic information or whether the road is icy, might be sent without concern, but personal data like geolocation will need more protection. More so if it's defined as being "special category data", like biometric identification or user habits that could identify a health condition.

Yeah, we probably can't keep up with the hackers

Going on, Bulander said that from a technical standpoint "absolute security" would never be possible because of the speed of technological change and abilities of hackers to circumvent security systems.

The Reg asked one technician to give us the basics of in-car security, given that nefarious types are probably already planning to crack the system for shits, giggles or cash.

If your car is hacked, he said, information on the attack will go back to a Bosch security centre for the code to be analysed line by line, and a patch pushed out to the fleet as well as the car in question.

At the moment, only one of the Electronic Control Units in the car is able to send information back to ground control, but Bosch plans to increase this so the hacker can't take out the one ECU that could report back.

This defence system isn't just for the benefit of the customer – it also allows the manufacturer to stop tech-savvy drivers installing the latest connected car update, like heated seats in the long winter months, for free.

It would be unfair to imply that the Bosch boys (yes, we can say that – your reporter was sadly one of just a handful of women at the event on Tuesday) didn't understand the importance of data protection.

But there were a couple of jokes that it was "for the politicians" to sort out – and while it's true that their job is to advance the tech, if all those involved in rolling out autonomous cars don't get that there's an important balance to be struck, the regulators might face a more difficult ride.

Next page: No drugs at the wheel for you sir, it's only level 3
Page:
Tips and corrections
112 Comments

Bosch and Daimler jump in together on driverless vehicle tech

We suck? No, James Dyson. It is you who suck – Bosch and Siemens

Want a free Bosch steam iron? You'll have to TALK TO THE DEAD